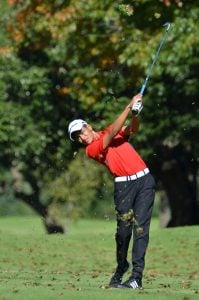 4 July 2018 – South African juniors Deon Germishuys and Nikhil came through their baptism of fire at Pinehurst Number 2 with flying colours to retain spots in the top 10 at the Junior North and South Championship in North Carolina on Tuesday.

“It was another very hot and humid day in North Carolina,” said Peter Little from the South African Golf Development Board, who accompanied the Bridge Fund Manager Junior Series Finalists to the prestigious invitation-only tournament.

“The boys were excited to start the second round, but wary of tackling one of the top ranked courses in the world. Both found the course extremely challenging, but said that they appreciated the honour of competing on the Number 2 course.

“Only one players from the starting field of 89 juniors managed to shoot 69 and break par on this championship layout, which illustrates just how tough this course plays. Deon shot 74 and Nikhil returned a two-over-par 72.

“Naturally, they were a little disappointed with their scores, but they acquitted themselves really well and most importantly, they remained in the top 10 with all to play for in the final round on Wednesday.”

Gopal carded a level-par 72 at the Number 8 course to start the second round in joint 10th. The 17-year-old mixed two birdies with four bogeys at the Number 2 course and rose two spots to a tie for eighth on two-over 144.

“I’m certainly not unhappy with a 72; like Deon said, I can come home and tell people I beat the SA Amateur champion at Pinehurst Number 2,” joked the KwaZulu-Natal golfer.

“It was really an honour to play there and it was an interesting day, to say the least. The greens were super challenging and I found the course very long. I was hitting 2-iron into some par fours, so it really was a test for me.

“I started well with a par at the first but three-putted the second and the third after finishing on the wrong side of the greens. I found out early on how the course can punish you. I made a great par at four, a good birdie at five and hit it to a foot at nine and tapped in for my second birdie. The rest of the round was really solid, except for a three-putt bogey at 13 and I short-sided myself at 17, which is really easy to do at this course.” 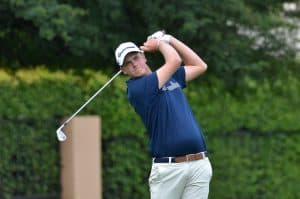 Reigning Sanlam SA Amateur champion was one off the pace after an opening three-under 69, but slipped to joint fifth on one-over 143 after carding six bogeys and two birdies in his round of 74.

However, the Western Province golfer will start today’s final round just three shots behind American junior Ross Funderburke, who took the sole lead with a 71 at the Number 2 course.

“I three-putted the first after hitting a good drive and approach and I was really annoyed after I had another drop at the fourth, but managed to box a short putt at five for birdie. My other birdie came at the 10th.

“It wasn’t pretty, but at least I didn’t lose too much ground on the leaderboard. I feel really honoured that I played the Number 2 course, but I’m glad we are playing the final round at Number 8. I like the feel of the course and hopefully I can make up a few shots early on and get into the mix over the last nine holes.”