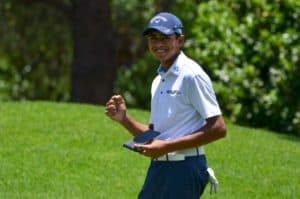 “Yurav made international headlines last year when, at just 15 years and five months, he became the youngest amateur to qualify for the SA Open and the youngest to make the 36-hole cut,” said South African Golf Association President Naadir Agherdien.

“We nominated our top six ranked players in the GolfRSA Open Amateur standings to fill our six exemption spots for the 2020 championship, but Yurav missed out as he was ranked seventh at the cut-off date. However, when the Sunshine Tour invited Jovan to return as the defending amateur champion, they also offered us an additional spot.

“We didn’t hesitate to nominate Yurav. He has earned the privilege of teeing it up in the world’s second oldest Open with two exceptional seasons in 2018 and 2019. We are also pleased to see Jovan back at Randpark. The SA Open presents a wonderful learning opportunity for our amateurs to gain invaluable experience and we are excited to see how these eight rising talents handle themselves on this big stage.”

Premlall is thrilled at the prospect of rubbing shoulders with the cream of the Sunshine, European and Asian Tours on the Firethorn and Bushwillow courses at Randpark.

“Last year was an amazing experience; a real eye opener,” said the Grant Veenstra Golf Academy member.  “I learned a lot from the professionals about processes and course management. They all have a process before each shot and it helps you to centre your focus. The four days at Randpark taught me a lot of things I used this year to improve my game.

“I would like to thank the South African Golf Association and the Sunshine Tour for another chance to compete in the SA Open. Also a big thank you to the City of Joburg for supporting our national championship. I would like to take this opportunity to thank Mr Rupert and GolfRSA for all the opportunities I have received as a member of the GolfRSA National Squad.”

This record-setting performance at Randpark in 2018 capped a breakthrough year for Premlall.

The Glendower junior announced himself early in the season with a runner-up finish in the Nomads SA Boys Under-15 Championship and a top 13 finish in the SA Stroke Play Championship. Buoyed by six top 10 finishes on the junior circuit and three top fives on the Open Amateur circuit, the youngster gave a fine account of himself in Italy, placing 11th in the Reply Italian Under-16 Championship.

A maiden Sunshine Tour Junior Series win in the Cape Town Junior Open in October sparked a great run over the last few months as he celebrated an Open Amateur breakthrough in the Silver Salver and Central Gauteng Open.

Picking up where he left off, Premlall won the season-opening Nomads National Order of Merit Coastal in 2019 and reinforced his status as one of South Africa’s emerging stars with victories in the KZN Amateur Match Play and Harry Oppenheimer Trophy on the Open Amateur circuit.

“Yurav has been one of the most consistent performers on the GolfRSA National Squad with four runner-up and 18 top 10 finishes in his 27 starts this season and was equally impressive abroad,” said GolfRSA CEO Grant Hepburn.

“He finished fourth in Italy this year and during the GolfRSA National Squad Tour to Great Britain and Ireland, he reached the match play stage of The Amateur Championship and finished top 10 in the East of Ireland Open Amateur.

“On top of that, Yurav became the youngest winner on the Big Easy IGT Challenge Tour and won on the Bridge Fund Managers Junior Series. He was also a major contributor to Ekurhuleni’s historic first victory in the premier South African Inter-Provincial. Playing at number one, he helped the juniors to seal a hat-trick of SA Under-19 IPT titles at Oubaai Golf Club this December.

“Jovan enjoyed to major victories on the US collegiate circuit this season and recently broke into the top 20 in the official world amateur golf rankings. The younger members of the GolfRSA National Squad look up to him and we are excited to see him back in the SA Open for a fourth time.

“The SA Open is the Holy Grail of Golf for our amateurs, and we are grateful that the South African Golf Association and the Sunshine Tour recognise the tremendous work ethic, dedication and enthusiasm of our amateurs by offering them another opportunity to tee it up in our national Open.”