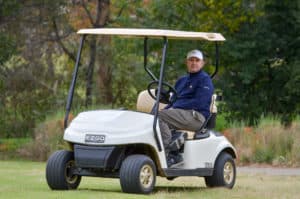 GolfRSA is proud to announce that it has selected Neil Homann to represent the organisation at the forthcoming 118th US Open Championship at Shinnecock Hills.

Homann, GolfRSA’s manager for Operations, Rules and Training, will act as a rules official for the second major of the year.

“It’s a real honour to be able to officiate at such a prestigious event,” explained Homann. “I’ve been a rules official in many professional and amateur events in South Africa, but this will be my first Major, so I’m very excited.”

The opportunity came about when the USGA contacted GolfRSA and offered the organisation a spot on its rules team. This marks the first time that a member of GolfRSA or the South African Golf Association (SAGA) will have officiated at the US Open.

“We are very grateful to the USGA for this opportunity and we grabbed it with both hands,” explained Grant Hepburn, CEO of GolfRSA. “Neil ticked all of the boxes in terms of rules qualifications and he heads up our rules training here in South Africa, so he was an obvious choice. I’m sure he will do GolfRSA proud.”

Shinnecock Hills is a special place for South Africans, as it the course where Retief Goosen won his second US Open, in 2004. Homann is hoping he will be a part of and witness more South African success.

“I know that the first ruling will be nerve-wracking,” he said, “because there could be a few thousand people watching. But at the end of the day, the rules are the rules and they apply equally to everyone, so I should be OK. I’m sure it will be a lot of fun.”

With the rules of golf undergoing a major overhaul next year, Homann is hard at work preparing his training programmes for all who wish to be accredited rules officials in 2019.

“All rules officials will have to requalify, so I will have the rules schools up and running from the end of October, “ he explained.

Before then, Homann has a rather important week to get through.