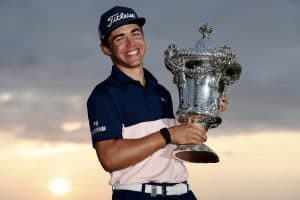 20 September 2020 – Garrick Higgo became the first GolfRSA National Squad member to break through on the European Tour with a life-changing triumph at the Open de Portugal at Royal Óbidos, thanks to a stunning bogey-free seven under par final round of 65.

The left-handed South African, whose final bogey of the week occurred on the tenth hole of his second round, finished on 19 under par, one stroke clear of Spain’s Pep Angles who finished second on 18 under par.

Higgo’s countryman George Coetzee continued his excellent form and followed his Portugal Masters victory with a tied for third place at Royal Óbidos on 15 under par, alongside England’s Andrew Wilson, with Sweden’s Jens Dantorp and Spain’s Carlos Pigem finishing tied fifth on 14 under.

Higgo dropped just three shots during the tournament – a double bogey on his sixth hole of the week and that bogey on the tenth during his second round – and had played only a handful of third round holes when Saturday’s play was suspended due to darkness.

The 21-year-old returned to the course on Sunday morning and carded a six under par round of 66 to end round three just one shot off the lead, which was held by Portugal’s Vitor Lopes.

Lopes could not continue his low-scoring performance of the first three rounds and dropped off the pace during round four, but Higgo picked up where he left off.

Five front nine birdies, including a chip-in on the sixth hole, saw him make the turn in 31 before further gains on the 11th and the 18th saw him finish on 19 under par.

It was a nervous wait for the Stellenbosch native with Angles playing in the group behind, but when the Spaniard was unable to convert the 35-foot eagle putt he needed for a play-off, victory was secured.

Higgo, whose victory comes in just his seventh Tour start, admitted that the feeling had not yet sunk in following his win.

“It feels awesome,” he said. “I thought it was going to be a little bit easier over the last three holes but Pep made it a bit tough. That birdie on the last was really, really nice.

“I just really enjoyed it and I just made sure I had fun out there. It’s awesome. It feels pretty surreal to be honest. I’m sure it’s going to kick in tonight but my family and everyone is excited, I’m excited, it’s an awesome feeling.”

Higgo now adds a European Tour title to two victories on the Sunshine Tour and his maiden win on the Big Easy IGT Challenge Tour.

He credited a change with his putting as the key to his victory in Portugal.

“I could have done even better, golf’s always like that. It was nice. I don’t think I made a bogey in two days, so I was just really, really sharp. My short game was very good, I chipped in three times so every time I was out of position, I made it a ‘double-plus’.

“The last couple of weeks, I was struggling with my putting. I think I was over-reading everything and this week, I just went with my first read. I think you can quickly see things that aren’t there, so that was kind of the key this week.”

Last year’s Sunshine Tour rookie of the year will now receive additional European Tour playing rights after winning in Portugal, an event which was dual-ranked with the European Challenge Tour.

“It does give me a lot of confidence,” he said.

“It was a bit of a big hit with Covid meaning there isn’t any promotion from the Challenge Tour this year, so obviously one of the dual-ranked events is ideal to win because you can get straight on to the European Tour. It’s an awesome feeling to get it done.”