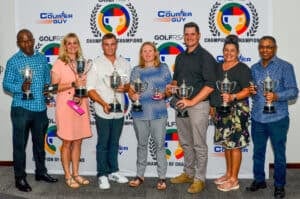 26 October 2022 – The National Final of the GolfRSA Champion of Champions, delivered by The Courier Guy, came to an exciting conclusion at Kyalami Country Club, with the A Divisions of the men’s and women’s events needing to go to playoffs to determine the winners.

The GolfRSA flagship tournament seeks to find the country’s ultimate club champions across multiple divisions, and this year included a Caddie Division for the very first time. 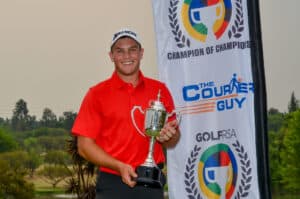 For the first time in the history of the event, there was a three-way playoff for the men’s title, with Humewood’s JP van der Watt, Sandy Lane’s Andrew Hagemann and first-round leader Matthew Cooper from Clovelly all finishing the 36-hole event on +3.

Ultimately it was Van der Watt who prevailed and was crowned the 2022 GolfRSA Club Champion of Champions after a tense two-hole play-off.

“I didn’t expect this at the beginning of the week, but it feels great to be the Champion of Champions,” said van der Watt. “It’s such a unique tournament. It’s fun and the atmosphere is light, but it is still very competitive because we all wanted to win.

“For a lot of players, an event like this is the highlight of their golfing careers. A 22-handicapper doesn’t really get to play in tournaments set up like this.” 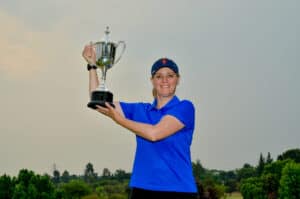 The pair then set off for a deciding playoff and it was the experienced Traut who secured victory, adding some more precious silverware to her collection.

“I have really enjoyed the camaraderie this week – it has been a blast,” the 41-year-old Erinvale Club Champion said. “I was blown away by the growth of this event since I last played five years ago.

“There are far more divisions, and I was thrilled to see the higher handicapped players and the caddies also get to share in this incredible opportunity. Thank you to all involved. We couldn’t stop talking about the extraordinary lengths that was gone through in making this such an awesome experience for everyone involved. Every element of the experience was so well organised, and the course was absolutely brilliant!” 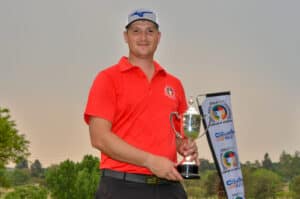 No upsets in the two B-Division events, which were settled in regulation play.

Pretoria Country Club’s Stevan Swarts carded rounds of 74 and 82, which was good enough for a six-shot victory over Erik Holtzhausen from Euphoria’s by six shots.

“When I won my club championship, I thought that would be the highlight of my career. I couldn’t believe it when I won the regional to make the national final and now I’m going home to tell my family that I’m national champion,” Swart gushed.

“I came here with no expectations and had the time of my life. I’m beyond words.” 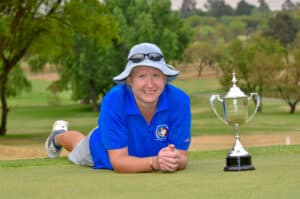 “I’m speechless. The first thing I thought was that I’ll have to win again next year, so can come back. I was so thrilled a week ago when I helped Border to win the B-Section of the SA Women’s Inter-Provincial and now this.

“Definitely the two highlights of my season. Thank you to everyone involved for an incredible week.” 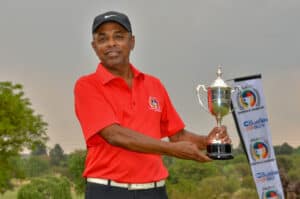 Gonaseelan “Gator” Reddy made a great start in the men’s Stableford competition with an opening a round of 37, but the Royal Durban golfer was put under pressure by a surging Owen Putzier from Alexandria Golf Club in the final round.

“Owen was playing some great golf and shot 37, but a 34 got the job the done,” said Reddy after winning by two shots.

“I thoroughly enjoyed the event, the high standard of golf and the incredible effort that went into organising it. Well done GolfRSA and Paul Adams and his team – great effort.” 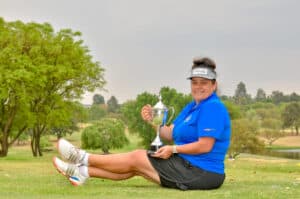 And the women’s division also served up a debutant champion!

“The tournament exceeded all my expectations, including me winning the C-Division. I just wanted to come out here, have fun, meet new people and give it my best shot.

“I am absolutely delighted with the outcome. It’s been an awesome week and I really hope I can do it again.” 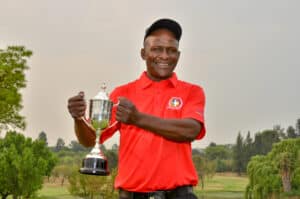 The new Caddie Division saw 12 caddies from the country battling for the bragging rights of becoming the country’s first GolfRSA Club Caddie Champion of Champions.

“I didn’t play my best golf this week, but I lived to be the winner,” said Dijo, whose rounds of 78 and 76 earned him a nine-shot victory over Sydney James from De Zalze Golf Club.

“I have to admit that I got a little bit frustrated on the front nine in the final round, but I told myself to stay patient, and it paid off. I’m just happy to be crowned the winner. It’s really special to be the first winner of the Caddie Champion of Champions.

“This has been a really great experience and we thank GolfRSA for this opportunity. I hope I can make it back to defend my title next year, but even more I hope that my win, and the great golf from all the caddies who played this year will inspire more caddies to try out in 2023.”