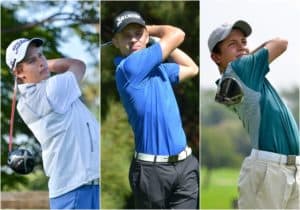 Tyran Snyders, Kyle de Beer and Christiaan Maas has been named to the 2019/2020 GolfRSA National Squad.

CAPE TOWN, 16 August 2019 – GolfRSA is pleased to announce the addition of three new caps to the GolfRSA National Squad for the 2019/2020 season.

“We work closely with the South African Golf Association Talent Development and Management Committee and these three players have been on our radar for a considerable time.

“Given the departure of Deon Germishuys, Garrick Higgo, Wilco Nienaber and Matt Saulez to join the paid ranks this season, we are delighted to be in a position to recognise their performances by including them in the GolfRSA National Squad. We trust that this announcement will serve to encourage the other up-and-coming talent in South Africa.”

Twenty-one-year old De Beer, a Human Movements Science student at Nelson Mandela University in Port Elizabeth, has maintained a steady rise in the rankings over the last eight months.

“Despite being a full-time third year student, Kyle plays a full schedule, and with two victories and a runner-up finish among his highlights this season, he has risen to fourth in the Open Amateur rankings. His performances abroad in team events, and individually, bodes well for his future. Furthermore, his continued commitment to the amateur game in South Africa is commendable and we consider Kyle a fantastic ambassador for GolfRSA and South Africa,” Hepburn said.

Snyders is sitting his matric year at Paarl Boys High and will be transitioning into Open Amateur at the end of the season.

“Tyran has been building a strong reputation on the junior circuits at Western Province Golf, the national circuit and the Bridge Fund Managers Junior Series in the last two years,” Hepburn said.

“His comprehensive victory in the high-profile Junior North and South Championship at Pinehurst in July spoke volumes of the way he is starting to package his game to compete for wins. We believe he will be a valuable addition to the squad.”

Fifteen-year-old Maas is fast becoming another one of the exceptionally talented young golfers to break onto the national junior and Open Amateur stage, and showing the ability to compete on both levels.

“In his last five starts on the national junior circuit, Christiaan posted four top five finishes and won the Dimension Data Junior Open at Fancourt. He also enjoyed four top 15 finishes at Open Amateur level and broke into the top 20 in July with his runner-up finish in the Limpopo Open Stroke Play Championship,” said Hepburn.

“These performances earned Christiaan a spot in the South African Under-16 group that will compete in the Reply Italian Under-16 Championship at the end of August. We believe that with the guidance from within the squad and the continued coaching and mentorship of his coach Nico van Rensburg, Christiaan will fulfil continue to blossom.”

The GolfRSA National Squad, now in its fourth year, was set up with funding from businessman and GolfRSA chairman of the board Johann Rupert. The squad provides funding, support, advice, training camps and playing opportunities for the best of South Africa’s young golfing talent.

“The ultimate aim with the squad is to produce stronger national teams and provide individuals with the best preparation to be competitive golfers,” remarked Hepburn.

“We have enjoyed great success since the squad’s inception in 2016. Our members achieved an unprecedented five international wins, highlighted by Jovan Rebula’s triumph in The Amateur Championship, in 2018. This year, Martin Vorster won the country’s second successive title in the East of Ireland Open Amateur before he captained the GolfRSA Junior Proteas to victory in the Toyota Junior Golf World Cup in Japan.

“We are blessed to have wonderful structures in place, starting at club level and continued by the unions and our vast pool of talented teaching professionals. Thanks to the excellent groundwork put in by the provincial unions and the clubs, we are able to identify players early and get them into the squad system as soon as we can. Mr Rupert’s generosity enables us to enrich the amateur experiences of some of our most talented players to help them perform at the highest level in amateur golf and beyond.”