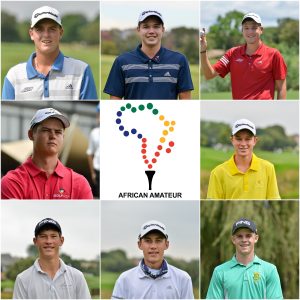 The GolfRSA Senior and Junior Teams have been named for the 2019 Africa Amateur Stroke Play Championship at Leopard Creek; photos Ernest Blignault

CAPE TOWN, 24 December 2018 – The fourth African Amateur Stroke Play Championship will hold huge significance for Sam Simpson from Western Province, who will don the green and gold for South Africa for the first time in mid-February 2019.

The South African Golf Association (SAGA) named the Bellville golfer to the GolfRSA Junior Team that will represent the country alongside a GolfRSA Senior Team in the highly-ranked international tournament at the magnificent Leopard Creek from 11-14 February.

The African Amateur Stroke Play Championship draws a large number of international competitors annually and the 36-hole team competition is played concurrently with the first three rounds of the 72-hole stroke play championship. In the past three years, England, Scotland, France, India, Ireland, Mauritius, Reunion, Switzerland and Zimbabwe have all fielded teams in the team competition.

“Sam has enjoyed a watershed season in 2018, highlighted by victories in the Tshwane Junior Open and Joburg Junior Open,” said SAGA President Geoff Taylor. “He recently rose to second in the Junior Rankings and we are excited to see how he performs in his debut for South Africa.

“Sam will join fellow juniors Jayden Schaper, Christo Lamprecht and Martin Vorster, who edged out France and Ireland to win lift the Team title at Glendower Golf Club in February.”

Wilco Nienaber was the fourth member of the victorious GolfRSA Junior Team last year. He graduates to the GolfRSA Senior Team in 2019 and will also captain the side. Reigning Sanlam SA Amateur Deon Germishuys, and fellow GolfRSA National Squad members Luca Filippi and Therion Nel, who represented South Africa in the Juan Carlos Tailhade Cup and the Argentine Amateur in October, complete the team.

Matt Saulez from KwaZulu-Natal was selected as the reserve for the GolfRSA Seniors and reigning Nomads SA Boys Under-17 and Under-15 champion Casey Jarvis for the GolfRSA Juniors.

“All eight golfers hold positions in the top five of the Open Amateur and Junior Rankings and have performed consistently well at home and abroad this past year,” said Taylor. “We are confident that we are sending two very strong teams in to bat in the fourth African Amateur Stroke Play Championship.”

Nienaber rose to number one in the Open Amateur rankings in 2017.

The Bloemfontein golfer held on to the top spot with victories in the Free State Open and Western Province Amateur Stroke Play and Match Play Championships, as well as a slew of top five finishes. Within a week of finishing second in the English Men’s Open Amateur Championship, Nienaber became the first South African to win the Qualifying Stage of the Amateur Championship since the 36-hole stroke play qualifier was introduced in 1983.

Germishuys backed up his Sanlam SA Amateur victory with a series of top five finishes that saw him rise to number two in the Open Amateur Rankings. The Western Province golfer also won an event on the USGA junior circuit and placed fourth in the prestigious Junior North and South Championship in July.

“Luca was a two-time winner at home this year and Therion won four times on the Open Amateur circuit,” said GolfRSA CEO Grant Hepburn. “The pair also performed admirably in Argentina, where they sealed a top five finish for South Africa in the Tailhade Cup.

“Jayden and Christo both qualified on world amateur ranking points for the International Team at the inaugural Junior President Cup in 2017. Jayden became the first junior to win all four Nomads SA Boys titles last year and enjoyed a great season in 2018, which saw him rise to the top of the Junior Rankings.

“Christo, who won the Dimension Data Junior Open earlier this year, became the first foreign champion and youngest winner of the East of Ireland Amateur Open during the GolfRSA National Squad Tour to Great Britain and Ireland.

“Martin converted a number of close calls at home with victory in the Junior Open at St Andrews, while Sam has been impressive on the local circuit and showed immense promise with a runner-up finish in the Reply Italian Under-16 Championship in Italy in August.

“We applaud the SAGA on their selection. They have named eight in-form and experienced players to fly the flag for South Africa and I am confident that these teams will do us proud in the fourth African Amateur Stroke Play Championship at Leopard Creek.”

Simpson said being named to the GolfRSA Junior Team was the proudest achievement of his career.

“To represent South Africa is something I’ve dreamt about for a long time and I worked incredibly hard to make my dream a reality,” said the 16-year-old.

“I can’t even put it into words what this means to me. I am incredibly excited to tee it up with Jayden, Christo and Martin at Leopard Creek. We all know each other really well and we are definitely committed to defending the title.”

Written and released by Lali Stander on behalf of Golf RSA.