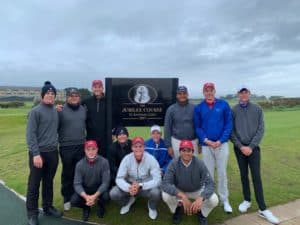 South Africa’s leading amateur Jayden Schaper will spearhead 12-strong group a group of 12 local talents when the St Andrews Trophy gets underway at the Home of Golf in Scotland on Friday.

ST ANDREWS, Scotland (6 June 2019) – South Africa’s leading amateur Jayden Schaper will spearhead 12-strong group of local talents when the St Andrews Trophy gets underway at the Home of Golf in Scotland on Friday.

Rated one of the strongest amateur tournaments in the world by the R&A World Amateur Golf Rankings, the 2019 edition will see 144 of the world’s best amateur golfers compete for the coveted trophy from 7-10 June at St Andrews.

No less than 21 of the 26 players in the Great Britain and Ireland Walker Cup team will be in action at the Old and Jubilee Courses looking to impress the on looking selectors ahead of the Match at Royal Liverpool in September.

Scotland will be well represented with African Amateur Champion Euan Walker leading the charge and the field is further strengthened by defending champion John Murphy and the lowest ranked player is Australia’s David Micheluzzi, currently seventh in the World Amateur Golf Rankings (WAGR).

Vorster makes a welcome return to the stage where last year he captured the Junior Open title and the Southern Cape junior will be hunting back-to-back victories following his four-shot triumph in the East of Ireland Amateur Open at County Louth Golf Club in Drogheda last week.

First played in 1989, the St Andrews Links Trophy has attracted some of the leading amateurs from around the world over the past 30 years, many of whom have gone on to enjoy success on the PGA and European Tours, notably Ernie Els, Lee Westwood, Trevor Immelman, Geoff Ogilvy, Padraig Harrington, Justin Rose, Rory McIlroy and Francesco Molinari.