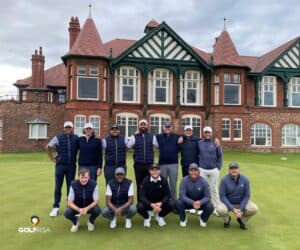 The 127th Amateur Championship tees off today, with a total of 10 South Africans gunning for a chance to join Bobby Cole (1966) and Jovan Rebula (2018) as South African winners of the world’s most prestigious amateur golfing event.

The first goal for the 288-strong field is to make it through to the match play stage.

To lift the coveted trophy, players will first need to advance through the 36-hole strokeplay qualifier at Royal Lytham & St Annes and St Annes Old Links courses over the next two days. Only the top 64 and ties advance to the match play stage, where it is a straight knockout draw.

Rebula lifted the title in the 123rd Amateur Championship when he defeated Irishman Robin Dawson 3 & 2 in the 36-hole final just days after Wilco Nienaber became the first South African to win the gruelling qualifier at Royal Aberdeen.

The GolfRSA National Squad contingent is a strong one, featuring eight of the top nine players on the GolfRSA Ranking, spearheaded by current GolfRSA No 1 Christiaan Burke.

Van Wyk, who is based at college in the USA and has been in sublime form for the past few months, joined up with his colleagues in England this week on the back of his NCAA Championship debut for the College of Charleston.

The final South African entrant, University of Louisiana Monroe senior Otto van Buynder, is the only non-squad member and arrived at Royal Lytham fresh off a 38-place finish in the St Andrews Links Trophy.

You can follow the live scoring of the Amateur Championship here.