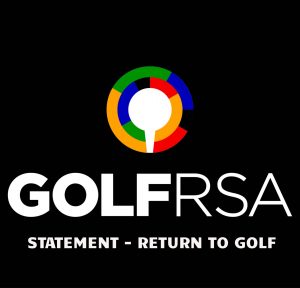 A decision by government on Golf’s return and the timing of this return was made early in the week.

GolfRSA’s delegation that presented the initial proposal on 30th April for the return of golf was commended by the Minister of Sports, Arts and Culture for the content and detail of the approach in the meeting and in the weeks that followed.

Since then, the Department of Sports, Arts and Culture has engaged in regular dialogue with Golf.

During these ongoing discussions, GolfRSA shared supporting documentation and verbal feedback regarding all of the work that has gone into preparing the industry to be able to manage the risks related to the spread of Covid-19.

Furthermore, our acquisition of the HealthDocs application for the industry, as well as our extensive plan for a safe return that will save clubs and secure jobs for many people in the vulnerable sector, was favourably received.

The decision made at the highest level of government early in the week has been based on these regular discussions and our commitment to being compliant and ready for a safe return.

The process has been both complicated and sensitive, however we anticipate an announcement from government within days.

We urge that the Alert Level 3 Gazetted Regulations must continue to be observed and we thank golfers and facilities for the ongoing collaborative support received in this regard.

As stated previously, GolfRSA distances itself from clubs and golfers demonstrating defiance of regulations, as such actions could jeopardise the impending announcement by government.