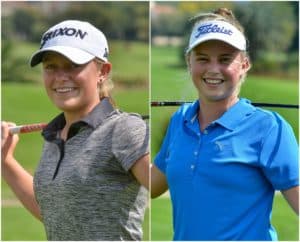 GolfRSA Squad pair will compete in the 70-strong player field of the prestigious 54-hole stroke play championship, hosted by Golf Hall-of-Famer Annika Sorenstam and her charitable organization, the ANNIKA Foundation, at the World Golf Village in Florida.

Not only does the Annika Invitational USA presented by Rolex offer valuable points for the World Amateur Golf Rankings and Rolex AJGA Rankings, the winner receives an exemption to compete in the Florida’s Natural Charity Classic on the Symetra Tour, which is the feeder circuit for the LPGA Tour.

“We are so privileged to be sending two of our top girls to compete in this tournament for the fifth year running,” said Womens Golf South Africa President Sally Greasley.

“Annika and her foundation host a series of seven events across Asia, Australia, Europe, North and South America however, the Annika Invitational USA is widely recognized as one of the strongest fields in girls’ golf.

“The tournament annually draws top ranked amateurs between the ages of 12 and 19 from all around the world and it is undoubtedly one of the hottest tickets in girl’s junior golf globally. In addition to competing against the cream of junior girl’s golf, the girls interact with Annika, who is intimately involved in the championship with a bevy of activities, including a clinic where she shares her “winning approach” philosophy with the girls.

“Our juniors have given a superb account of themselves in this event over the last two years and we are delighted to once again offer two of our top juniors this incredible experience.”

In 2018, reigning SA Women’s Amateur Match Play and Stroke Play champion Kajal Mistry closed out a top six finish and last year, former Youth Olympian Kaiyuree Moodley led through 36 holes and claimed an impressive runner-up finish at the Slammer and Squire Course after losing out in a three-way play-off to Sweden’s Ingrid Lindblad.

“Caitlyn struggled with her swing over the first two days, but she came out guns blazing on the last day, firing a two-under-par 70 to share the low round honours last year,” said Greasley.

“She dominated the GolfRSA Open and Junior Amateur rankings with a slew of victories and gained a huge amount of international experience representing South Africa abroad, where she competed against top ranked juniors in the Toyota Junior Golf World Cup, the Girls British Amateur and the Duke of York. She also captained the GolfRSA Proteas to a tie for second in the prestigious Astor Trophy in Canada and I believe the experience will serve her well in her second appearance at the challenging Hammer and Squire Course.

“Megan has catapulted in the rankings in the last 12 months, rising to third in the Open Amateur rankings and second in the Junior standings. In addition to her first provincial victory in the Boland Amateur, she performed exceptionally well in our premier events with a tie for sixth in the SA Women’s Stroke and reaching the semi-finals in the match play championship.

“She also made history as the first girl to lift the individual title in the SA High School Championship at Koro Creek and in her international debut in the Ciputra Golfpreneur Junior World Championships in Indonesia last year, she tied for third in the Girls 15-18 age group.

“Irrespective of their results, the overall experience of competing in this event will prove incredibly valuable for both girls. Since the inaugural ANNIKA Foundation tournament – the 2009 ANNIKA Invitational USA – a total of 60 alumnae have earned LPGA cards, with 28 competing in the ANA Inspiration last year.”

England’s Humphreys won the European event and Zeballo from Argentina the Latin America event last year and An from Chinese Taipei is the 2016 ANNIKA Invitational at Mission Hills winner.