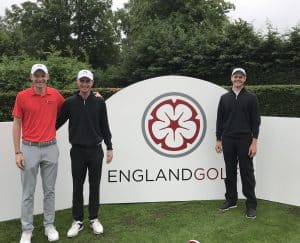 31 May 2018 – Seven members of the GolfRSA National Squad will be in action in two highly-rated golf championships in Britain this weekend.

Wilco Nienaber, Matt Saulez and Malcolm Mitchell joined a world-class field in the first round of the Brabazon Trophy today, while Christo Lamprecht, Therion Nel, Clayton Mansfield and Jayden Schaper will start the East of Ireland Amateur Open at County Louth on Friday.

Nienaber, Saulez and Mitchell – respectively first, second and third on the South African Golf Association Open Amateur rankings – had their first look at the testing Red Course at the Frilford Heath Golf Club on Monday.

“Definitely a risk and reward course,” said team manager David Younge. “There are some driveable par fours to take advantage of, but course management will be critical. A couple of good shots will see you score well, but wayward shots will cost you.”

The local trio will have some hot favourites to contend with.

Nienaber, Saulez and Mitchel kicked off the GolfRSA UK Tour at Royal Lytham where Saulez led the group with a top 30 finish in the Lytham Trophy.

The top three met up with the rest of the squad at Royal County Down, where the group competed in the Flogas Irish Amateur Open. Saulez once again led the GolfRSA National Squad challenge with a joint seventh finish.

The group played both courses (the O’Meara and the Montgomerie) at Carton House, which will host the prestigious World Amateur Team Championships later this year, and played a round at the world-class European Club. 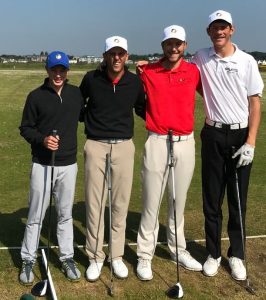 Jayden Schaper, Clayton Mansfield, Therion Nel and Christo Lamprecht will be in action in the East of Ireland Amateur Open at County Louth.

Nienaber, Saulez and Mitchell left for England, while Lamprecht, Nel, Mansfield and South Africa’s top ranked junior Schaper remained in Ireland, where they prepared to do battle with the cream of Irish golf on the Baltray Links at County Louth Golf Club.

“We played Royal Dublin Golf Club and Portmanock, where the Amateur Championship will be held next year,” said team manager Neil Homann.

“There isn’t a course in South Africa that can truly prepare these youngsters for links golf in Britain, so we are pleased that we have created plenty of opportunities for them to gain experience.”

Lamprecht said the quartet is fired up to face the daunting links layout.

“We were put through the wringer at Royal County Down, where we had to the battle tough weather conditions and an extremely challenging course. Having the opportunity two more courses before the East of Irish was great, because we can use every bit of experience we gain.

“We are all excited to start the championship. The locals describe County Louth as one of the best kept secrets of Irish golf and they say that there isn’t a weak hole on the course. It promises to be another proper test of golf, especially if the wind gets up.”

The past winners list of the East of Ireland, which dates back to 1941, is littered with names that have gone on to other major successes in the game, including recent European Tour Golf Sixes joint-champion Paul Dunne.