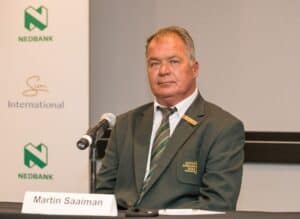 “Martin was an enormous servant of the game, and he impacted many lives in his golf journey over the last 30 years,” said GolfRSA Chief Executive Officer Grant Hepburn. “It didn’t matter to Martin if he was attending a board meeting or cheering on his beloved Ekurhuleni Roses or his grandchildren – he brought the same level of enthusiasm and energy to everything in his life. We will miss his passion the most of all.”

Saaiman served in golf administration for more than three decades, including 12 years as President of the Ekurhuleni Golf Union.

He began representing Ekurhuleni Golf Union on the South African Golf Association’s National Executive Committee (SAGA NEC) in 2008 and was elected chairman of the Championship and Tournaments Committee a year later. In 2013 he was appointed as a national selector and served on the SAGA’s Finance Committee. 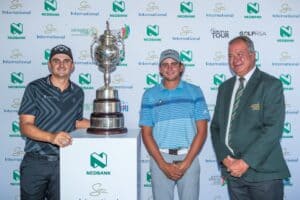 “Martin’s dedication and commitment to the furtherance of golf in South Africa was unquestionable,” said Hepburn. “We valued his guidance and leadership, especially over the last 18 months as we navigated golf through what has been undoubtedly the toughest battle we have ever faced in South Africa due to the Covid-19 pandemic.

“When Naadir took an early leave of absence, Martin stepped into the breach and ensured a seamless transition. His compelling passion and enthusiasm continued to shine in his new role. We are extremely saddened that his life has been cut short, and our hearts go out to his wife Marti and his children and grandchildren. Martin’s legacy lives on through the excellent golfers that he helped to develop, and now perform on the world stage, as well as through the administrative structures that he left behind.”

Senior Vice President Henk Smith, who has served on the SAGA NEC with Saaiman since 2017, said his unexpected passing will leave a significant void in the golf industry. 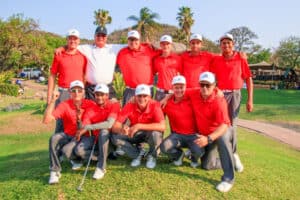 “Martin was a true servant of the game, and it is with very heavy hearts that we as the SAGA NEC bid him goodbye. Martin was deeply passionate about all levels of the game. He was a great mentor, and there are many amateurs at Ekurhuleni Golf Union who flourished under his leadership. Martin was also a wonderful family man and a very loyal friend. We will continue to work hard to keep his legacy and spirit alive.”

Womens Golf South Africa President Sarah Braude said: “Martin was always generous with his time and ready with a joke and his smile lit up a room.

“His enthusiasm and dedication to developing golfers of the future, from grassroots, club or at the elite level will be sorely missed. His passion for providing National Championships of the highest standard was unwavering, especially during the challenging times of the past year.

“Our deepest condolences go out to Marti and his family and may they find strength in Martin’s legacy of dedicated service to golf in South Africa.”

Rest In Peace Martin. May your light and your love of the game always shine down brightly on us all.