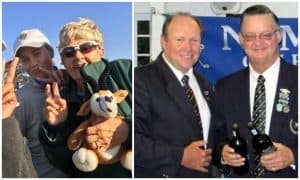 It is with enormous sadness that we learned of the passing of two of South African golf’s greatest servants, Norma Potgieter and Neale Kunhardt.

On behalf of GolfRSA, Womens Golf South Africa (WGSA) and the South African Golf Association (SAGA) and all our members we extend our deepest condolences to their families – our thoughts and prayers are with you all in this sad and difficult time.

Norma and Neale generously devoted years of lives in the administration, promotion, and support of the game for nearly 30 years each, and we are deeply saddened by their passing.

Besides her 12-year tenure as the President of Northern Cape Ladies Golf Union, Norma served the union on committee level in administration, as well as a team manager and a mentor to the up-and-coming young players for 16 years.

In addition to steering the ship at SAGA in 2007/2008, Neale wore many hats during his service in the golf industry, including President of Eastern Province Golf Union, President of Port Elizabeth Golf Club and Nomads Golf Club of South Africa National Chairman. In 2009, Neale became the 9th Honorary Life Member of Nomads and a pillar of strength in Eastern Province.