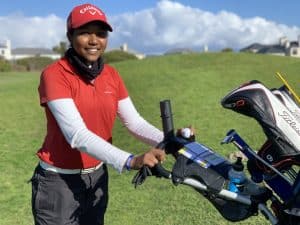 Zara le Keur never really considered golf as a career option. In fact, the closest the she got to the game was hitting golf balls at the driving range with her dad Wayne. However, a chance meeting with teaching professional Kurt Stripp at the Momentum Driving Range in 2017, changed her life.

Just a year after she joined Royal Cape Golf Club, the talented 15-year-old began to pluck the fruits of her labour. Two B-Division victories on the Western Province Golf circuit followed and in 2019, Zara confirmed her blossoming talent when she was crowned Ladies Club Champion at her home course.

After a recent tie for third in the Bridge Fund Managers Junior Series at Atlantic Beach Links, we caught up with the Western Province Golf Women’s High Performance Squad rising star to chat golf, goals and dreams and to get to know her a little better with our quirky Chip Shots series.

Q – Tell us where and when your love affair with golf started.
ZLK – I got my first golf clubs at the age of three and I used to practice with my dad on a park or any open field. He was my first golf coach. I wasn’t really serious about golf but one day when we were out at Momentum Driving Range in 2017, Kurt walked over. He told my dad I showed real talent and said I really should get professional coaching. He taught at Royal Cape Golf Club, so I joined the club. Then I was accepted into the Western Province Golf – Women’s Junior Squad and I’ve never regretted my decision.

Q – Are you the sort of golfer who sets yearly goals? If so, what goals did you set for yourself to achieve in 2021 and beyond?
ZLK – My goals are improve my GolfRSA Women’s Open Ranking and I would like to represent Western Province Golf in the SA Women’s Inter-Provincial and ultimately make the Womens Golf South Africa National Squad.

Q – As a member of Western Province Golf’s Women’s High Performance Squad, how has their assistance impacted your game?
ZLK – It has helped me in the sense that I receive mental and performance coaching and I have gained some great experience in playing national tournaments against the top ranked girls. Last year I played in the A-Division for the first time, and it was a great experience competing against players like Caitlyn Macnab, Kaylah Williams and Kiera Floyd. Through the squad I also get the opportunity to travel and play in different provinces.

Q – Talk to us about the strengths of your game and what are the weaknesses or aspects of the game you still need to attend to.
ZLK – My short game and putting are my strengths, but it can always improve. I would also like to improve my long game.

Q – In a very short period of time, you are rising through the ranks and you certainly announced yourself in the Bridge Fund Managers Junior Series. What inspired you to enter the tournament and did you expect to that well after such a long time without competitive golf?
ZLK – It was the first tournament after a long break due to the Covid-19 lockdown and I didn’t expect much. I just entered to get back into the swing of things and I didn’t start very well.

I have improved the mental side of my game a lot and I just stuck to playing own game. Pretty soon I was striking the ball well again, and I managed to turn things around with a few birdies. I dropped a couple of shots on the back nine but birdied the 16th and parred the last two holes for a one-over-par 73, which got me joint third. That was a really nice surprise.

Q – How did you keep your game sharp during the initial countrywide lockdown due to the Covid-19 pandemic before the golf courses were re-opened in June?
ZLK – My dad set up a net in the backyard and I practiced my swing almost every day and I practiced my putting in my room.  I also continued with my exercise routine at home since I could not see my personal trainer.

Q – Do you participate in other sports at school, or is golf your primary focus?
ZLK – I played netball and did cross country running at primary school, but I decided to focus on golf when I started high school. 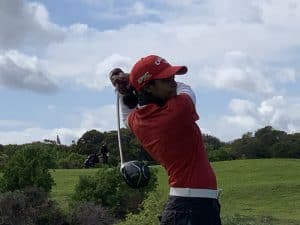 Q – What is the best piece of advice you have ever received?
ZLK – You can’t worry about the past or future it’s not going to change anything; we can only focus on the present.

Q – What’s your go-to club in your bag and why?
ZLK – Has to be my hybrid, because it always keeps me in the fairway.

Q – What advice would you give youngsters just starting in the game?
ZLK – Enjoy the game and never let the bad shots ruin your day.

Q – Do you have any superstitions before golf or on the golf course?
ZLK – No I don’t have any.

Q – Long term, what are your goals for the future and how does golf feature?
ZLK – I am in grade 10 this year and I hope that after I matriculate, I can go to America on a golf scholarship and compete on the collegiate circuit.

Tell us 5 things about yourself that most people don’t know.
I really like singing
I am a drum major in a Christmas Marching Band
I’m currently learning to play the Alto Saxophone
I don’t like pasta, but have to eat it when Mom makes it
I love ice-skating

Q – If you had to pick up one animal to describe you, what would it be and why?
ZLK – I’ll be a Tiger because it is very calm but it can be aggressive when it needs to be.

Q – Describe the best meal you’ve had while on the road and where you had it.
ZLK – It was a dessert – a chocolate mousse cake at OR Tambo airport while travelling from Orkney to Cape Town after the Nomads SA Girls Championship.

Q – What is your favourite season and why?
ZLK – Spring because it’s not too hot or too cold and it’s my birthday season.

Q – Is there anything you are addicted to or can’t live without?
ZLK – Golf, music and my phone.

Q – Tell us about something you hate doing and why?
ZLK – Hate is such a strong word. I don’t think I hate anything. Yet.

Q – As a child, what did you wish to become when you grew up?
ZLK – I wanted to become an Astronaut.

Q – Describe yourself in one word.
ZLK – Ambitious.

Q – What movie can you watch again and again?
ZLK – I’m in love with musicals, especially High School Musical and Mama Mia.

Q – Tell us about three things you consider yourself to be really good at.
ZLK – Cooking, sports and skating.

Q – What three things would you want to have on a deserted island and why?
ZLK – Food, 80/90s play list and a lob wedge to practice my bunker shots.

Q – If golf wasn’t an option, what profession would you pursue and why?
ZLK – Anything involving the outdoors. I don’t want to be stuck in an office.

Q – If they made a movie about your life, which actor would you pick to play you and why?
ZLK – Zendaya, because she can act, dance and sing – all the things I’m passionate about.

Q – What are your biggest fears?
ZLK – Cockroaches.

Q – If you could trade places with anyone for a day, who would it be and why?
ZLK – Tiger Woods because I want to know how it feels to be one of the greatest golfers that ever lived.

Q – If you could meet and have lunch with anyone in the world – real, fictitious, dead or alive – who would you choose?
ZLK – Naya Rivera, who played the role of Santana Lopez in Glee. (The actress drowned in July 2020 after saving her son)

Q – What is your guilty pleasure?
ZLK – Chocolates.

Q – Who would you like to play with in your own Fantasy Fourball?
ZLK – Tiger Woods, Minjee Lee and Colin Morikawa.

Q – If we gave you a free plane ticket anywhere, where would you go and why?
ZLK – I would like to go to Paris and take a selfie at the Eiffel Tower.

Q – What is your favourite quote from a movie or a person?
ZLK – Santana Lopez in Glee: “Oh please, you guys love me. I keep it real and I’m hilarious.”

Q – Lastly, what is still on the bucket list for Zara le Keur?
Getting my driver’s license
Skydiving
Bungee jumping
Play in a Pro Tournament as an Amateur