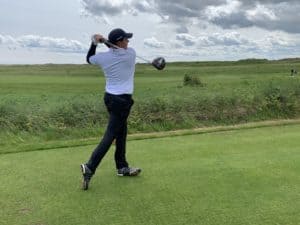 Vorster from Southern Cape and Ekurhuleni’s Jarvis both carded one-over-par rounds of 73 to tie for 13th on one-over 145 alongside Premlall from Ekurhuleni.

Duminy from Southern Cape posted 76 to grab a seat on bus on two-over 146.

All seven members of the GolfRSA National Squad teed off in the afternoon and were severely tested by a strong south-easterly wind that tore around the County Louth Golf Club layout.

“We teed off in a three to four club wind and all of us agree that this was easily the toughest round of golf any of us have ever played,” said 15-year-old Jarvis.

“I made a rough start with three bogeys in a row, with two three-putts, but I told myself to stay patient. I hit lob-wedge to 10 feet at 13 and boxed the putt for birdie, but I dropped another shot at 14. At the par three (15) the wind was heavy right to left. I hit 8-iron to five feet and made the birdie putt. I hit a sand-wedge from 130 yards out to tap-in on 16 for another birdie.

“At 17, the other par three, I hit 2-iron to 20 feet and drained the birdie putt. The 18th was another tough hole, not reachable in two with the wind. I hit driver, 2-iron and sand-wedge to 10 feet and made the birdie putt. I was really happy to save my round.”

Jarvis turned one under, but had further drops at three and five.

“I birdied the sixth to get back to level par, but unfortunately I dropped the ninth,” said the State Mines Country Club. “It was a really tough day, but I’m so happy to still be around. Martin, Yurav and I are just four off the pace and Jordon is five behind. I think we’re all in a strong position with two rounds to play to still go out there and play to win on Monday.”

Vorster reeled in three birdies in his outward loop to turn two-under, but also dropped a trio of shots coming home, including a bogey at the closing par four ninth.

“I got off to a great start with a birdie at 10 straight into the wind,” said the 17-year-old Pinnacle Point golfer. “I hit a low draw down the fairway, but I had a blind second shot because of the big hill in front of the green. I had 135 metres flag and I went with a punch 6-iron straight into the wind. It pitched two metres behind the pin and I made the putt.

“From there I just played for fairways and greens. The birdie at 18 was another good one, because it was also playing into the teeth of the wind. I hit a low drive down the left, but it was too far to go for the green, so I laid up with a low 3-iron. I chipped from 60 metres out to two metres behind the pin and made the birdie putt.

“The back nine was challenging in the wind and I dropped a couple of shots coming home. We will be facing similar conditions on Monday, so the only strategy will be to keep it in play.”

Premlall mixed five bogeys with pars for a round of 77.

Duminy from Pinnacle Point was one of only two players who birdied the 419 yard par four.

“It’s the club’s stroke two and it was playing straight into the wind,” said the 16-year-old Louis Oosthuizen Junior Golf Academy player. “I hit a driver down the left that held it shape into the wind, which was also off the left. I had 145 metres to the pin and I hit 5-iron to five feet behind the hole. The putt broke about four to five inches right, mostly due to the wind.

“It was a great feeling when it dropped. I was solid over the first nine holes, but I let a couple slip on the back nine, so that birdie finish felt like an eagle.”

Sam Simpson, Christiaan Burke and Matt Saulez missed the cut to 42 players and ties, which fell at four-over-par 148.

Simpson from Western Province missed by just one shot after carding a second round 77, Burke from Free State returned an 80 to finish on eight-over and Saulez battled his swing en route to an 89 that saw the KwaZulu-Natal golfer finish on 17-over.

Live Scoring for the East of Ireland Amateur Open
https://www.golfnet.ie/tournaments/2920/east-of-ireland-amateur-open-championship