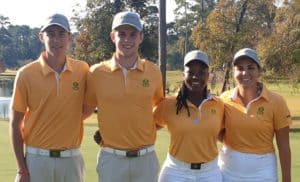 7 November 2019 – The Spirit International Golf Championship has been a training ground for stars of tomorrow spanning the globe, and GolfRSA Proteas Zethu Myeki, Symone Henriques, Martin Vorster and Sam Simpson are among the 80 players hoping to go on to bigger and better things after this week.

The first championship in 2001 got off to a rough start, scheduled just weeks after the worst terrorist attack on US soil: 9/11.

Although a few countries pulled out with the ongoing threat of travel, the majority came and the “Spirit” of golf prevailed. That year, rising star from Mexico – Lorena Ochoa – led her team to victory.

The official torch lightning ceremony signalled the start of the biennial event that brings together male and female amateurs from 20 countries and six continents on Wednesday and today, it’s down to the business of golf at Whispering Pines Golf Club.

The 2015 edition had to be cancelled two years ago due to Hurricane Harvey and the South African quartet are relishing the opportunity to rub shoulders with this year’s star-studded field that features no less than 17 players ranked among the top 100 in the world.

Cole Hammer, the current number 2 player in the World Amateur Golf Ranking, is among the favourites this week as is reigning U.S. Amateur champion Andy Ogletree and Walker Cup star Sandy Scott from Scotland.

France’s Pauline Roussin-Bouchard, ranked seventh in the world and a four-time winner in 2019, 14th ranked Emilia Migliaccio and 19th ranked Kaitlyn Papp are the women’s standouts.

However, the South African quartet have a wealth of experience and can certainly hold their own in the battle for bragging rights.

Randpark’s Myeki soared to a career-high second in the GolfRSA Open Amateur rankings this season after backing up four runner-up finishes with victories in the Ekurhuleni, Northern Cape and Free State Opens.

Henriques from Glenvista Country Club flew in from Daytona State College, where she took up a golf scholarship in August and bagged her first win on the US collegiate circuit in only her third start for the Lady Falcons in the Stetson Hatter Fall Classic.

Former Junior Open champion Vorster added the East of Ireland Amateur Open title to his growing list of international victories in June, and a month later the Pinnacle Point Estate member captained the GolfRSA Junior Proteas to the country’s second victory in the Toyota Junior Golf World Cup in Japan.

Simpson’s contributions of 70-65-63-68 on the Ishino Course at Chukyo Golf Club helped the South African team to an 11 shot victory and a record-setting 41-under-par 811 total.

The Spirit International Golf Championship was designed to promote a great competition among the nations and encourage camaraderie between golfers from around the world is the ultimate winner.

“We’ve come here to win, but it’s great to make some friends while we’re at it,” said Myeki. “It’s a fantastic learning curve for us and we are relishing every moment.”