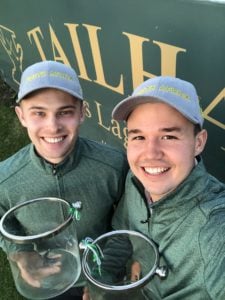 While Andrey Borges from Brazil fired seven birdies for a six-under-par 65 to open up a three-shot lead, the South African pair struggled in the 3-club swirling wind that troubled the field in the first round at the Los Lagartos Country Club in Pilar.

De Beer – making his second appearance for South Africa after a successful debut in the All Africa Golf Team Championships in Mauritius in October – opened with a two-over-par 73.

“I played pretty solid golf, but I had two really big numbers on my card,” said the Port Elizabeth golfer.

“I hit it to an inch on the par three 10th to get off to a birdie start and picked up another birdie on 17, but it was sandwiched between a bogey on 16 and a double on the 18th. I made a nice birdie on the first, and had a couple of good par saves before I hit it out of bounce on the fourth and walked off with a triple.

“I was happy to righten the ship with a birdie on the seventh and a par-par finish, but it was not the start I was hoping for. The double and the triple really hurt me, because I was playing pretty decent golf in the conditions. I will definitely try to keep the mistakes to a minimum in the second round and try to get a few more birdies on the card.”

Filippi, who partnered Therion Nel to a tie for fifth in the team competition last year, rued a cold putter after carding five-over 76.

“It was really a struggle out there,” said the Milnerton gol

fer. “I made a poor start with bogeys on the 11th and 12th holes and two more before the turn. I birdied the par five second, but dropped two more coming home.

“I hit the ball so nicely, although it was tough in the wind to judge the distance on the approach shots, but I putted extremely poorly. I had 34 putts and you’re not going to score well with those statistics. I did some work and hopefully the putts start dropping on Friday.”

Brazil tops the team leaderboard on one-under 141, with Argentina second on even-par and Canada in third on one-over 143. The South African pair tied for fifth on seven-under with France and Spain.