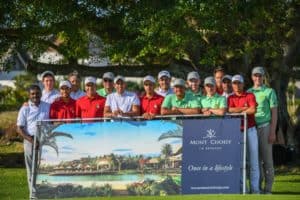 14 October 2019 – The GolfRSA Proteas returned home on Monday, having successfully defended the country’s proud record in the All Africa Golf Team Championship with a captivating performance in Mauritius.

The four members of the GolfRSA National Squad sealed South Africa’s 10th consecutive triumph with a 46-shot victory on 27-under-par 837 and moreover, their rounds of 221, 206, 205 and 205 at Mont Choisy Le Golf featured no less than three course records.

Mauritius gave the local crowd plenty to cheer about when the team combined for a final round 214 to seal second on 19-over 883, while Morocco finished third 27-over 891.

South Africa’s number one ranked Jayden Schaper, who won the Individual Competition and led the country to a 25th victory in the Africa Region 5 Golf Tournament in Namibia in April, once again spearheaded the challenge.

The Ekurhuleni golfer opened with a one-over-par 73 and co-led the first round with Martin Vorster, while new caps Kyle de Beer and Jordan Duminy posted respective rounds of 75 and 78.

In the second round, De Beer went bogey-free to claim the low round honours and a new course record with a five-under-par 67.

“I sunk a 50-footer on the second hole and that got the putter going early in the second round,” said the Port Elizabeth golfer. “I didn’t really hit the ball all that well, but wherever I gave myself a look at birdie, I made the putt.”

Schaper followed with a 69, while Vorster carded 70 and Duminy signed for 73.

The third day saw Vorster match De Beer’s course record with a flawless effort of his own and the winning Toyota Junior Golf World Cup captain was well supported by rounds of 69 from Schaper and De Beer and a solid level par 72 from 16-year-old Duminy.

“We definitely didn’t perform as well as we thought we would on the first day, but given the four-club wind and rain, we took it on the chin and set ourselves a new goal to build on our two-shot lead,” said Vorster from Southern Cape.

“The mood in the camp remained upbeat and, as the weather improved and we got to know the course better, we started shooting the scores we anticipated. We are confident head of the final round that we will bring the trophy home.”

Duminy, making his debut for South Africa abroad, dipped below par for a round of 70, setting the tone for the team in the final round.

“The highlight of the round wasn’t the birdies I made, but this great par save I made on the second hole,” said the Southern Cape junior.

“The tee shot was straight into the wind and I tried to hit a high cut and it plugged in the lip of the fairway bunker. I worked it out with a 9-iron to 75 metres, but I had to be careful with the approach as there was a big down slope behind the flag. I hit it to three feet and boxed for par.

“It was the best feeling ever to contribute to the team total on the last day. I really enjoyed wearing the green and gold for the first time. It was such a huge honour representing my country and a lot of fun playing the guys and getting to know them better off the course, as well.”

De Beer registered a final round 71 and Vorster returned an even-par 72, while Schaper saved his best golf for the last day. 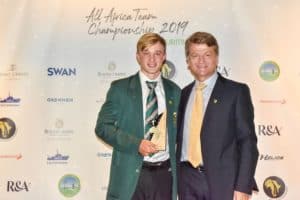 South Africa’s number 1 ranked Jayden Schaper won the All Africa Golf Team Championship Individiual Competition by 7 shots with a course record 67 in the final round at Mont Choisy Le Golf.

The Ebotse golfer made amends for a lone bogey at the par three fourth with a birdie at the first par five and reeled in further gains on the seventh and 10th holes before he racked up five birdies on the bounce from the par five 12th.

A birdie finish for an eight-under-par 64 earned Schaper a new course record and the top spot in the Individual Competition.

“We played 36 holes on the Friday and by the third round, the putter was working really well,” Schaper said. “I got a little unlucky on the ninth and 10th holes in the afternoon and had a triple and a double, but I fought back to shoot 69.

“The wind was still up on the final day, and I got off to a slow start, but I kept fighting and turned one-under. It was really windy down the back, but I played solid and the putter was working well. I kept giving myself chances for birdies. I’m really happy to have finished off the week with a really solid round of golf and it feels great to won the course record.

“The team played very well as a unit and we kept a positive vibe going all week. We are really proud that we kept South Africa’s winning record going because the conditions were trying and the competition was tough and put a lot of pressure on us, irrespective of what the results say.”

The GolfRSA Proteas captured the All Africa Golf Team Championship for a 10th consecutive time at Mont Choicy Le Golf in Mauritius.

South African Golf Association President Naadir Agherdien travelled with the team to Mauritius and was extremely pleased with their performance.

“We had young team with two new caps, and punched well above their weight,” said Agherdien.

“We effectively sealed the team event win on day two and the final round was about being relaxed and chasing the course record. And it happened with Jayden shooting a 64 in winds gusting at 30kph on occasion.

“We are so proud of them. They are wonderful ambassadors of our country and very early on became the darlings of the locals, attracting big walking galleries with them during the tournament. And their collective performance speaks volumes for our Elite Squad program.”

“We are proud of our players,” said Christophe Curé, President of the Mauritius Golf Federation.

“We would like to thank the organising team, our sponsors and volunteers, without whose support this event wouldn’t have been such a success! We’re proud to have demonstrated our ability at hosting an event of this magnitude and are turning this page with great satisfaction.”

During the tournament, the Board of the African Golf Confederation selected Curé as its new president. Agherdien was re-elected as the Vice-President South and Uganda Golf Union president Johnson Omolo was elected to the Vice-President North position.