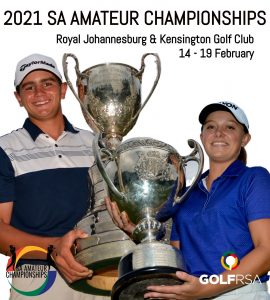 SA’s No 1 ranked Casey Jarvis & Caitlyn Macnab will both be defending in the 2021 SA Amateur Championships at Royal Johannesburg & Kensington Golf Club from 14-19 February.

18 January 2021 – Excitement is building as South Africa’s top amateur talents gear up for the annual South African Swing, which tees off in February.

“It is disappointing that, due to the circumstances surrounding the worldwide pandemic and the restrictions imposed by countries abroad on travel to South Africa, we have lost some international participation this year,” said GolfRSA CEO Grant Hepburn.

“However, this opens up the opportunity for more of our local players to qualify for, and compete in, our flagship events. The invaluable experience they will gain from competing against the cream of amateur golf in South Africa will benefit their careers in the long run.”

Jarvis grabbed international headlines in 2020 when he became the youngest winner of the South African Stroke Play and just the seventh amateur to achieve the rare double with his victory in the South African Amateur Championship a week later. In December, the 17-year-old GolfRSA National Squad member cemented his credentials as one of the game’s future stars when he won the Freddie Tait Cup as the leading amateur in the South African Open at Sun City. 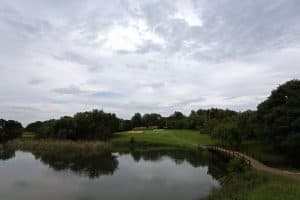 Jarvis has set his sights on becoming the first winner of the South African Swing trifecta, needing to win the African Amateur Championship to complete the sweep of the country’s top amateur men’s events.

The State Mines golfer will make an eagerly awaited return when he defends the South African Stroke Play Championship at Randpark Golf Club from 1-4 February. 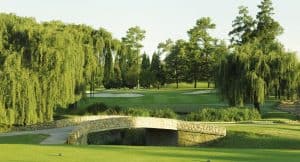 To enable competitors and staff to remain in one community for the duration of the South African Swing, GolfRSA moved the prestigious 72-hole tournament from its traditional home at Leopard Creek Country Club to Glendower Golf Club this year. The venue change should be an advantage for the Ekurhuleni golfer, who spent many hours on this championship layout in his junior career.

From 14-19 February, Macnab and Jarvis will again hope to go the distance again at Royal Johannesburg & Kensington Golf Club. 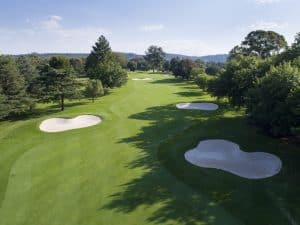 Jarvis matched Macnab’s calendar double when he ended the run of Scotland’s James Wilson with a 7&6 victory in the final. He will not only be chasing back-to-back titles, but will want to make amends for losing out to Sam Simpson on the Proudfoot Trophy in the 36-hole stroke play qualifier as well.

Hepburn is confident that GolfRSA has the measures in place to run the events safely.

“While the COVID-19 pandemic caused a lot of disruption to the sporting calendar in 2020, golf resumed successfully worldwide last year. Tournaments throughout the world continue to take place, while competitive amateur golf, on a club, provincial and national level in South Africa, resumed in October.

“Golf lends itself naturally to compliance with non-pharmaceutical interventions and avoiding the three C’s: crowds, close contact environments, and confined and enclosed spaces. The nature of the sport and strict adherence to the comprehensive GolfRSA Risk Mitigation Strategies and Protocols, together with the use of the HealthDocs application and our Tournament Risk Mitigation Plans, ensures a safe environment for participants.

“Our Risk Mitigation Strategies are focussed on promoting diligence around non-pharmaceutical interventions, including maintaining a safe social distance, the wearing of masks and sanitizing, and we have shown in the last seven months that the sport can be played safely.

“We look forward to a summer of golf of the highest standard, crowning new champions and shining a spotlight on the rising talents of the vast South African amateur pool.”