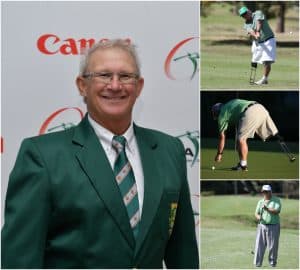 “We were deeply saddened to learn of Ben’s passing and our thoughts and condolences are with his family and friends during this difficult time,” said GolfRSA CEO Grant Hepburn.

“Ben’s achievements as a golfer are the stuff of legend. An extremely talented golfer, his career was littered with accolades, including a record six SA Open titles. But Ben was also a fantastic ambassador for the game and a true inspiration to the young players coming through the ranks of the First Swing Programme.

“He will be remembered for all his wonderful achievements, on and off the golf course. Ben’s legacy will live forever in the memory of disabled golf in this country and abroad, where he represented South Africa with honour and pride on numerous occasions.”

Mr Van Zyl passed away at the age of 61 after suffering a heart-attack on Tuesday, 27 June 2018.
His memorial service will take place at 11h00 on Wednesday, 4th July, at the NG Kerk Wilkruin in Klerksdorp.