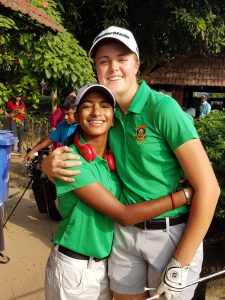 GolfRSA Squad members Kaiyuree Moodley from Gauteng and Kaylah Williams from Western Province are through to the match play stage of the IGU All India Ladies Amateur Championship in India; credit GolfRSA. (Moodley left, Williams right)

Moodley from Gauteng tied for 11th with successive rounds of 77, and Williams from Western Province carded rounds of 80 and 79 to finish joint 19th in the 36-hole stroke play seeding round at the par-70 Tollygunge Club golf course in Kolkata.

“It was much of the same for us both today, but it was somehow a lot better,” said 17-year-old Youth Olympian Moodley. “My driving off the tee was a lot better and that’s why I’m really positive. I’m also putting very well, but there is always room for improvement, though.

“We are really glad to be through to the match play and now we just need to adjust our mind-set for the format and get a bit more aggressive. We are excited to see how far we can push ourselves.

“It’s been a little hotter than we are used to, but it’s manageable and the course is beautiful.”

Williams was also upbeat about her chances in the match play.

“My stats were a lot better today,” said Williams. “I had a lot of errant tee shots in round one, so it was a bit of a nervy start, but I settled myself with some breathing exercises.

“The back nine was really solid, and although I dropped the last two holes, I got my feeling back. I feel a lot more positive about my game. I made a lot of good decisions today and played to my strengths. I had six one-putts, so I am happy with my putting.

“Danielle du Toit won the match play last year, so Kai and I are really eager to defend the title and we will give it everything we’ve got.”

Moodley will face local golfer Hunar Mittal from Haryana in the first round and Williams plays West Bengal’s Chitrangada Singh. Mittal carded rounds of 78 and 83 to finish finished 22nd overall on 161 and Singh tied for 10th on 154 for with rounds of 82 and 74.

First round leader Anika Varma won the qualifier on four-under 140 with rounds of 68 and 72.

“It was another trying day for both girls, but both played better and the spirit in the GolfRSA camp is very positive,” said Greasley. “I walked the front nine with Kaiyuree. Despite starting with a bogey and having two more at three and four, she played some very nice golf, settling down and parring her way to the ninth.

“I joined Kaylah at 13 and must have brought her some good luck. She parred the hole and followed with a fantastic birdie at 14 after a fantastic shot into the green that nearly finished in the hole.

“She hit a great drive down the middle at 16 and her approach left her with a good birdie chance, but her putt ringed the hole. Unfortunately a wayward drive at 17 ended up behind a tree. All she could do was punch out and take her medicine. She got unlucky at the tough closing hole when her drive finished in a divot on the right. Her chip went long and she two-putted for bogey.

“Both girls definitely had a much better day, game-wise and mentally. They are eager to start the match play stage. The Tollygunge course should make for some interesting matches and I am sure we can expect some sucker pins to tempt the players to fly the deep bunkers, which surround many of the greens.”