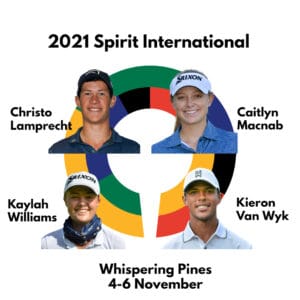 19 October 2021 – GolfRSA has named a powerful team to compete in the 2021 Spirit International Golf Championship at Whispering Pines Golf Club in Texas, USA from 4-6 November.

Martin Vorster and Sam Simpson came within two shots of winning the Boys event, ultimately settling for second place behind the USA, while the Girls team of Symone Henriques and Zethu Myeki finished in a tie for 16th.

GolfRSA CEO Grant Hepburn explained that, given the challenges in travel and quarantine requirements due to COVID-19, the selectors focussed on players that are based in the USA to represent South Africa.

“With so much uncertainty around travel and the COVID-19 pandemic, the selectors thought it prudent to select players who are attending college in the USA. Fortunately, South Africa has a wealth of talent in the current pool, and we are confident that we have selected a strong team that can perform really well in the Spirit International.”

Despite arriving late and missing a part of the American Spring, former SA Amateur champion Lamprecht has been an absolute standout for Georgia Tech since January.

“Christo completed his first season as the No 1 player for Yellow Jackets, all while maintaining a 3.37 academic average,” said South African Golf Association Acting President Henk Smith. “He has just gone from strength to strength in his second season, rising to 31st in the NCAA rankings this October.

“We are absolutely delighted to give Kieron van Wyk his first cap for South Africa. He was in excellent form this year.

“Not only did he have two runner-up finishes during the South African Swing in the SA Stroke Play and African Amateur Championships, but Kieron also reached the semi-finals of the SA Amateur. He enjoyed four top fives at provincial level and was ranked No 3 on the Open Amateur ranking when he left for the States in August. Earlier this month, he helped the College of Charleston men’s golf team to a seventh-place finish in the 23rd Bank of Tennessee Inter-Collegiate.”

“We all know the quality and experience that Caitlyn and Kaylah will bring to the SA team,” said Womens Golf South Africa President Sarah Braude.

“Not only did she leave for the USA as the No 1 ranked Open Amateur player, but this year, Caitlyn also became the first amateur to win on the Sunshine Ladies Tour in 14 years with her runaway victory in the Jabra Ladies Classic. In addition, she was the leading amateur in the Investec SA Women’s Open and the Jabra Ladies Open on the Ladies European Tour.

“Kaylah is also a former Junior and Senior WGSA Player of the Year and she has been a strong performer on the WGSA circuit for some years. Just before she left for the USA, she led Western Province to victory in the WGSA 72-Hole Teams Championship and she hit the ground running at Florida State University, helping the men’s and women’s team to victory with a perfect 3-0 record in the Inaugural Barbara Nicklaus Cup.”

The Spirit International Golf Championship is a biennial event that is played in the years opposite the World Amateur Teams Championship.

Since its inception in 2001, Major champions Jordan Spieth, Jason Day, Francesco Molinari, Martin Kaymer and LPGA Major winners Lorena Ochoa, Brooke Henderson and Paula Creamer are among the Spirit alumni, who have collectively gone on to win more than 650 professional events, including 23 major championships. South Africa’s best finish was as runner-up to England in 2005.

“The Spirit international is an invitation-only event with 80 participants from 20 countries, representing six continents. Most of the participants are the highest ranked players from each country or national champions, so the tournament is always a tightly-contested affair,” Hepburn said.

“Christo won the Irish Amateur Open in 2018 and was a member of the GolfRSA Junior team that won the 2019 Toyota Junior Golf World Cup, while Kieron was a runner-up in the ATI Ciputra Golfpreneur Junior World in 2019. Caitlyn led South Africa to a tie for second in the 2019 Astor Trophy in Canada alongside Kaylah, Kiera Floyd and Kaleigh Telfer, celebrating the country’s best-ever finish in this quadrennial championship.

“Here on home soil, Christo and Kieron both represented their provinces in the SA U-19 and Premier Inter-Provincials, while Caitlyn and Kaylah were both winning captains in the SA Women’s Inter-Provincial and WGSA 72-Hole Team championships.

“We have no doubt that all the experience our quartet has built in the last few years will serve them well in such a highly competitive field and we have every confidence that they will do us proud at Whispering Pines.”