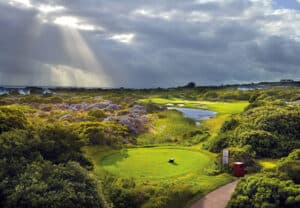 Adopting a Ryder Cup-style format, the event promises to be an exciting affair that pits the country’s best Senior and Mid-Amateur golfers against each other for a chance to be crowned inaugural champions.

“We recognise that international tournament golf has been severely disrupted by the COVID-19 pandemic over the last 18 months and there has been little opportunity for our top players to test themselves against global opposition,” said GolfRSA CEO Grant Hepburn.

“In the absence of the chance to earn national colours, we decided that the next best thing to keep the competitive fires of our elite Mid-Amateur and Senior players burning is to create an event where the country’s top players can test themselves against each other on one of the country’s top layouts.

“It also gives us the opportunity to recognise the individual achievements of our top players over the last 12 months.

“As a team event, we believe that the GolfRSA Coastal/Inland Challenge will generate a lot of excitement and stimulate much interest as players look to play their way into their respective teams.

“We are delighted to be able to take the event to one of the finest golf courses in the country, where players will be hosted by one of the best in the business, Jeff Clause. St Francis Links will provide a stern test for the teams, but the match play format should encourage plenty of good scoring on this magnificent links layout.”

Teams are due to be announced on 25th October, following the conclusion of the Senior Amateur Championship at Glendower Golf Club.

The top four golfers on the Senior Ranking from each region will be selected to represent their region, while the Mid-Amateur players will be selected based on a player’s three best counting tournaments results in the preceding 12 months. With a number of events on the calendar between now and the cut-off date, players have a good opportunity to play themselves onto the teams.

St Francis Links CEO Jeff Clause said, “We are privileged and excited to be the inaugural host for a new GolfRSA event. St Francis Links breathes for tournament play, matchplay in particular, as every hole will challenge and reward great shot-making. This will be an honour.”