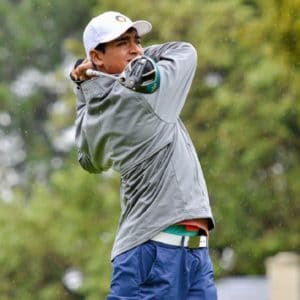 Yurav Premlall from Ekurhuleni in action for the GolfRSA Juniors on day 1 of the 16th SA Challenge Cup at Irene Country Club; credit Ernest Blignault

14 May 2018 – The GolfRSA Juniors made an impressive start to their title defence at Irene Country Club when they mowed down Gauteng North 9 – 3 in the opening round of the 16th SA Challenge Cup on Monday.

Christiaan Burke from North West and Bradley de Beer from Southern Cape won 6 & 5 to score first blood in the Foursomes and Ekurhuleni duo Yurav Premlall and Kian Rose made it 2 for the GolfRSA Juniors with a 4 & 3 win. Southern Cape pair Martin Vorster and Ben van Wyk took their tally to 3 points when they edged out Anthony Usmar and Kelso Hannay 1-up.

Casey Jarvis and Saul Moss fought back from 3-down, but Antoine Sale boxed an eight-footer at the last hole to salvage a point for the Daisies.

Premlall continued the beating in the Singles when he dispatched Wessel Duvenhage 8 & 7. Jarvis made amends for the 1-up loss in the Foursomes, beating Usmar 6 & 4, while Vorster and Burke added two more points,

Moss and Van Wyk both halved their games to put the GolfRSA Juniors on the early attack.

“The guys dug really deep to get the hunt for a fourth title underway,” said team manager David Younge. “Ben fought back from 2-down to halve against Kifentse Nukeri and a beautiful effort from Saul, who was 2-down with three to play, but rallied to halve against Armand van Graan.

“Bradley was really unlucky when his eagle putt lipped out and he lost 1-down to Kelso Hannay. Great wins from Yurav
and Casey and a solid win from Martin at number 2. Christiaan Burke was down throughout the match until 16, but he won 16 and 17 to win 2 & 1. 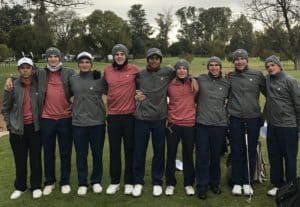 The GolfRSA Juniors made a strong start to their title defence in the 16th SA Challenge Cup at Irene Country Club; credit GolfRSA.

“The guys gelled really well in the Foursomes to give us the early edge and kept pushing in the Singles. They are really psyched to get out there for round two. A fantastic team spirit and the vibes are very positive.”

Western Province – hunting a hat-trick of titles – had to ward off a spirited assault from the GolfRSA Presidents Cup team to draw the opening match.

Neswill Croy and Christiaan Basson from Western Province narrowly beat Nikhil Gopal and Jordan Duminy 1-up to draw the Foursomes 2-all.

Duminy won 5 & 3 and Kieron van Wyk 4 & 3 to put the GolfRSA Presidents Cup team on the front foot. Aneurin Gounden, playing at number two, beat Ayden Senger 4 & 3 and Lwazi Gqira made it 6 points for the team when he knocked out Freddie Spenser 3 & 1.

Western Province got back in the fight when number one Luca Filippi beat Siyanda Mwandla 4 & 3 and Sam Simpson, Neswill Croy and Weyers Janse van Rensburg rallied to secure the draw.

Central Gauteng came into the team event gunning for record seventh title, but their bid was dealt an early blow by University Sport South Africa (USSA).

USSA edged 3 – 1 ahead in the Foursomes and rode their advantage to an 8 – 4 victory.

Cole Stevens claimed another point for Central Gauteng when he edged out Lieben Sheard 1-up, but

James Kennedy and Calvin Ferreira closed out victories in the final two games for USSA.

The GolfRSA Juniors top the log with 2 points and 9 games points, but USSA is just one games point behind. The GolfRSA Presidents Team share third with Western Province.