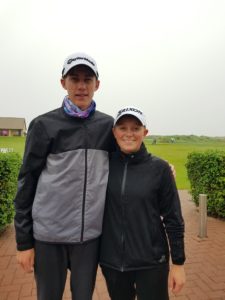 13 September 2019 – GolfRSA Junior Proteas Sam Simpson and Caitlyn Macnab felt both tapped out and buoyed after the Duke of York Young Champions Trophy wrapped up in Northern Ireland on Thursday.

For a third successive day, the field battled gale force wind and howling rain brought on by the marriage of Hurricane Dorian and Tropical Storm Gabrielle at Royal Portrush Golf Club.

Junior Presidents Cup-bound Simpson tied for 11th with rounds of 75, 84 and 74 and top ranked Macnab signed off with a joint 50th place finish after posting rounds of 84, 88 and 82.

“Sam and Caitlyn both felt that they survived a baptism of fire and I was heartened to hear them say that despite all the trials and tribulations, they learned some very valuable lessons here this week which will serve them well in the future,” said Womens Golf South Africa President Sally Greasley.

“Sam was struggling with his swing and Caitlyn battled an ice-cold putter, which are not ideal when you are facing an extremely tight course with very firm greens and Open Championship pin positions. Throw in the howling wind and sweeping rain over the three days of the competition and you have to be impressed with their fighting spirits and their determination to forge ahead despite the setbacks.

“Caitlyn’s putter once again refused to warm up in the final round, and the 4-club wind caught hold of a number of her tee shots and swept them into the thick, wet rough. She has certainly learned that she needs to work on is hitting lower shots to stay out of trouble in high winds.

“Sam was feeling particularly bleak after slipping from the top four to 17th with the 84 in the second round and he was really pleased his final round performance. Although he was still struggling with his swing, he controlled the ball much better and it showed in his score.”

Reigning Nomads SA Boys U-19 Stroke Play champion Simpson turned two-over after bogeys at the second and fourth holes and gave away further shots with successive bogeys on 12 and 13, but the Bellville golfer rallied with back-to-back birdies on 15 and 16 and parred his way home.

“You definitely gain new respect for the professionals when you’ve played a course like Royal Portrush,” said Simpson. “We played a number of courses during the GolfRSA National Squad Tour this year and the Old Course and Eden Course at St Andrews, but nothing prepared me for this challenging layout. It is so tight and it demands absolute perfection.

“I take a lot of confidence from the fact that I wasn’t on my A-game, but I still grinded out a top 20 finish. It was a really tough week, mentally and physically, but an incredible experience nonetheless and one I will reflect on again and again.”

Macnab, who lives on Serengeti Estate and often plays Ebotse links where her coach Grant Veenstra is based, wholeheartedly agreed.

“There isn’t a single links course at home that compares to Royal Portrush and I am really grateful that I got to experience this course,” said the 2019 Nomads SA Girls champion. “The extreme weather conditions kind of spoiled it, because we didn’t really have time to enjoy the course and to appreciate the incredible design.

“I had some great holes and some disastrous ones, but I am really glad I had this experience. Sam and I met some amazing golfers from all over the world and made many new friends and the organisation of the event was world class. Lots of lessons learned and things to go work on when we get home.”

Greasley believes that the juniors will benefit in the long run from the experience.

“Our players really found the week really tough. They get very few opportunities to compete on true links courses and certainly not in these extreme weather conditions and it was a really steep learning curve for both of them. They both came away from this experience with a much better understanding of what it takes to compete at courses such as Royal Portrush and this type of weather.

“It has been a joy for me to chaperone Sam and Caitlyn, who despite their obvious disappointment, always smiled and remained upbeat. Once again, we were complimented on our players’ behaviour, both on and off the course, by coaches, volunteers, club members and supporters. They kept the South African flag flying high, albeit a bit tattered after the beating it took in the wind this week.”