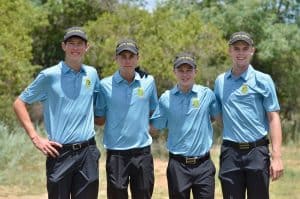 12 February 2019 – The GolfRSA Juniors picked up where they left off last year and made the perfect start to their title defence in the 54-hole Team Competition of the African Amateur Stroke Play Championship on Monday.

On a day when only five players managed to break par at the magnificent Leopard Creek, Jayden Schaper and Martin Vorster both finished in red figures to boost the GolfRSA Juniors to the top of the standings.

The defending champions will start today’s second round with a two shot lead over Sweden and Germany after combining for one-over 217 in the opening round.

Schaper, the country’s number one ranked junior, led the international field with a three-under-par 69, while reigning Junior Open champion Martin Vorster returned a one-under 71 and new cap Sam Simpson added a 77 to their score.

“To say today’s layout was a thinking man’s course would be an understatement,” said the GolfRSA National Squad sport psychologist. “There were some tough pins and interesting tee boxes that forced players to choose between more conservative or attacking options.

“We had an up and down day that saw us lead the team competition by three at one stage, then trail by five and eventually lead by two at the end of the day. That is the nature of this format, though, and the players stuck to their motto of reminding themselves that every shot counts.

“Jayden was his rock solid self and his competitive drive and motivation were only overshadowed by his great course management and execution. Martin started the day slightly at odds with his technique, but he found some elements on the range and made some great birdies out there, thanks to great ball striking and nerves of steel.”

Simpson also made a good start to reach the turn in level par, but hit some speedbumps on the homeward stretch with bogeys at 11 and 12 and a quadruple bogey at the par-five 15th.

“Sam started brilliantly, but had some misfortune on 15 but he bounced back with two pars and a birdie over the tough closing stretch and we couldn’t be prouder of the fight he showed.”

The final member of the team, former Sanlam SA Amateur champion and last year’s East of Ireland Amateur Open winner Christo Lamprecht came down with a stomach bug on the eve of the championship.

“Christo had a tough time preparing for the event and was still feeling quite fragile ahead of the first round. He teed it up with great enthusiasm and gave it his best effort. He was disappointed to sign for an 81, but kudos to him for encouraging and energizing his teammates throughout the round. If his attitude is anything to go by, it wll be a much better day for Christo on day two!”