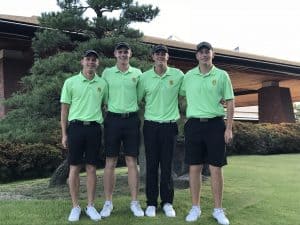 13 June 2018 – The GolfRSA Boys team are going all out in the final round of the 2018 Toyota Junior Golf World Cup, supported by JAL, in Japan on Friday after another solid day at the Chukyo Golf Club in Toyota City lifted the team to joint fifth.

Spain maintained their position at the top in the Boys Competition with a third round 207 and will start the final round seven strokes clear of Denmark on 20-under 619. The GolfRSA Boys posted one-over 214 to join Argentina and Sweden on four-over 643.

The GolfRSA Girls combined for 152 to share eighth with Italy, while Japan reclaimed the lead in the  Girls Competition with a third round 139. The local heroes lead Korea by six shots on 14-under 418.

“If consistency won tournaments then we would be leading,” said team manager Eden Thompson.

“The weather was really fantastic with the wind gusting, but not as bad as in the second round. The greens were quicker and firmer though, which made judging the pace really tricky.”

Senger had birdies at 13 and 14, but bogeyed the 10th (course first) when his drive disappeared in the water. He countered further bogeys at 14 and 17 with gains at 12 and 16.

“I struggled at 13 in the first two rounds,” said the Durbanville golfer. “It’s a tough tee shot, because you have to carry the bunker. I hit a big drive, landed safely and hit a 9-iron to six foot and sank the putt for birdie. At 14, I hit a nice 3-wood down the fairway, pitched it seven foot from the hole and made the putt for another birdie.

“Unfortunately I dropped my first shot in 27 holes at the first, but I was pleased that I cancelled all the bogeys today, which is something I failed to do in the opening round.”

Germishuys was two-over through seven, but found something standing on the eighth tee (his seventh hole). The 2018 Sanlam SA Amateur champion parred 16 and 17 and birdied 18. He got it to one-under with birdies at four and six, but finished bogey-bogey.

“I hit a 3-wood and sand-wedge to six foot and sunk a tricky downhill, left to right putt for birdie to turn one-over,” said the reigning Nomads SA Boys U-19 Stroke Play champion.

“I made great up-and-down to save par at 11 after I short-sided myself and hit it a foot short of the hole and made the birdie putt at 13. I chipped it to six foot at 15 and boxed the birdie putt and I was one-under with two to go when I hit it out of bounds on 17 (course eighth). On the last hole, I hit it in the fairway bunker. I pulled the shot slightly, and couldn’t up-and-down to save par. Not the finish I was hoping for, but it felt great to get into red figures again.”

Thompson said it was yet another day of mixed results for Vorster and Deyzel.

“Martin had another frustrating day,” said Thompson. ”He hits it great off the tees, but he is battling with accuracy on the shorter shots into the greens. This makes it difficult to score on a course where it is really hard to scramble for pars.

“Werner continued to battle a cold putter “He played much better and although the frustration is starting to show, he kept himself centred, which was great to see. The lads are fired up after climbing to fifth and determined to give it one big last push in the Friday’s final round.” 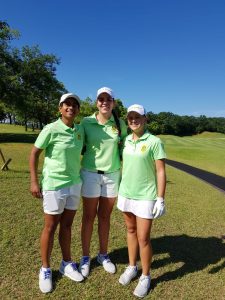 After two non-counting rounds, South Africa’s third-ranked Caitlyn Macnab from Ekurhuleni found her rhythm at the Ishino Course and carded a three-over 75 to lead the GolfRSA Girls team.

“I was very frustrated over the first two rounds, but I worked hard at the driving range and I struck the ball a lot better,” said Macnab, who mixed four bogeys with one birdie.

“There was a lot of positives to take out of this round, like the sand-save for birdie at the 13th after I missed the green short left and ended in the bunker. I am still battling to find the pace of the greens, but it was definitely a much better effort from me.”

“Caitlyn started off a lot better and that made a world of difference,” said Womens Golf South Africa president Sally Greasley. “She hit 13 green and fairways in regulation and it was good to see her playing her usual game.

“Kajal and Symone both struggled, especially going out, but both improved on the back nine. Kajal made birdies at one and seven, but lost the advantage with back-to-back bogeys at eight and nine. Symone was flawless over the back loop.

“They will need to dig deep in the final round, but irrespective of where they finish, it pleases me greatly to hear their many positive comments about the experience and the things that they have learned and been exposed to this week.”

Click HERE to view the scores from the Toyota Junior Golf World Cup, supported by JAL.