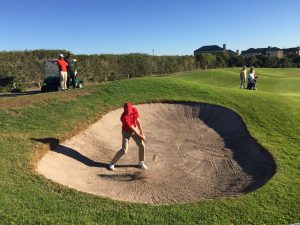 South Africa’s rising talent fought back superbly to overturn a calamitous start to beat the University Sport South Africa (USSA) team in the opening round of the 15th SA Challenge Cup in Melkbosstrand on Monday.

The GolfRSA Juniors were 3 – 1 down after the Foursomes, but Reece Haikney – the first man out in the Singles – turned the tide with a 6 & 5 conquest over Andrew.

Reigning Nomads SA Boys U-19 champion Jayden Schaper downed Province number two Altin van der Merwe 5 & 4 to level the score and that was all the motivation the rest of the line-up needed to turn up the heat.

Bradley de Beer, who debuted for GolfRSA Juniors in the International Triangular at Houghton, took out Michael Maybery 3 & 2 to give the juniors the edge and rookie Alex van Wyk widened the gap when he knocked out Hando Brophy 1-up.

The 7 – 5 victory put the young ones in pole position, however, the GolfRSA Juniors only have half-a-games point lead at 7.5 over five-time champions Central Gauteng and Western Province after both teams emerged victorious from tightly fought contests.

The host union led defending champions Gauteng North 2.5 – 1.5 after the Foursomes and Central also made a faltering start against the Presidents Team and had to rally from 1 – 3 down, but both teams managed to close out 6.5 – 5.5 results.

Province’s Hilmi Mallick beat Kifentse Nukeri 6 & 5 and Elmo Barnard and Stefan Blommaert’s victory took the hosts to 5.5, but Gauteng North’s Christ van der Merwe and Dawid Opperman hit back to keep the Daisies in the fight.

Nicholaus Frade reduced the gap to one point, but halves from Adam Botha and Chris Wicks in the last two games cemented the win for Province.

The Presidents Team continued their flying start in the Foursomes with victories from rookies Yurav Premlall and Cole Stevens in the first two Singles games.

James Pennington took down Lwazi Gqira 4 & 2 to reel the opposition in, and Keaton Slatter, Steven le Roux and Andrew Carlsson added three crucial points to level the score. Eric Wowor’s 1-up result against Keelan Africa put Central Gauteng in the lead for the first time.

With the score at 6 – 5, it was down to Siyanda Mwandla to beat Ruan Botha to force a 6-all draw.

The KwaZulu-Natal youth went 1-up on Botha when the Central Gauteng player double bogeyed the 15th and the pair halved 16 and 17 in pars, but Botha secured the win for 2014 champions with a birdie finish at the par four 18th.