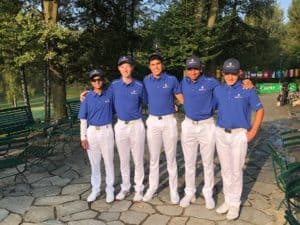 BIELLA, Italy (4 September 2018) – Amilkar Bhana and Yurav Premlall will lead the GolfRSA challenge on the final day of the 13th Reply Italian International Under-16 Championship after a day of mixed results at the Golf Club Biella le Betulle.

Bhana and Premlall finished the day in a tie for fifth on one-over and six shots off the pace from Scotsman Ruben Lindsay, who set the 36-hole target on five-under.

Fourteen-year-old Bhana stuck to a well-laid game plan to navigate the par-73 championship layout in level par, while Premlall steadied the ship with birdies at the 18th and first after dropping four shots in his outward loop. A further bogey at the par four sixth saw him sign for 76.

The 2019 Dimension Data Junior Open winner had two bogeys on the front nine, and dropped a further two shots on the par four 12th. He birdied the par five 16th for a round of 76 that earned the Pretoria Golf Club junior a share of 16th on four-over 150. 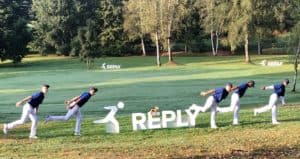 Pecanwood junior Nash de Klerk improved on his opening 77 by one shot and grabbed a share of 38th on seven-over with his 76, while Malan Potgieter from Kirkwood Golf Club finished in joint 75th with rounds of 78 and 80.

Bhana was one-under through the turn after he overturned a bogey at the second with a birdie at the tough sixth, and rallied with successive birdies on the eighth and ninth holes after letting another shot slip at the par five seventh

“I hit a 3-wood down the middle on the sixth and had about 140 metres flag,” said the reigning Nomads SA Boys U-17 champions.

“I hit a good 9-iron with a bit of a draw. I started it about one metre right of the flag and ended about 15 feet below the pin. I felt good about the line and I hit the uphill putt with the perfect pace and watched it drop for birdie. I felt really good about that one.

“Seven is a birdie hole, so I was really disappointed to drop a shot on the par five. I drove it down the middle and tried to go for the green in two, but I ended up in the bunker short left. I couldn’t get it on the green from the bunker and had to chip from 30 metres. It ran past and I missed the par putt.

“On the eighth, I drove it down the middle again and had another 9-iron in. The shot drew in from the right and finished 10 feet from the hole and I boxed the putt for birdie. The ninth is also a par five and this time I laid up. I hit a pitching wedge from 140 metres just past the pin. The putt was a downhill slider from the left and I knew once it passed the hole it would gain speed fast, so I was cautious with the pace. I put just the right pace on it and it dropped for another birdie.

“I had a great run of pars from the 10th but I spoiled it with a bogey finish (par five 18th). I felt good about the round, though. It was definitely a more solid effort. I felt that I executed my game plan much better than on day one.”