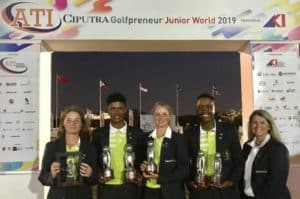 Van Wyk from Ruimsig Country Club closed out a joint runner-up finish in the Boys Class A in the 15-18 age group with a final round 76 at the par-72 Pantal Indah Kapuk (PIK) Course.

SA Women’s Stroke Play semi-finalist Streicher from Swellendam returned a final round 81 to tie for third in the Girls Class A Division for 15-18 year olds, while Whateley from Country Club Johannesburg grabbed a share of 16th in the same age group with a closing 77.

Nkosi from Pecanwood carded 75 on the final day for a joint fifth finish in the Boys Class B for 13-to-14 year olds.

“This world golf ranking event, presented by AKI and sanctioned by the Junior Golf Tour of Asia, draws entries from all over the world. Our players went head-to-head with 130 top ranked juniors from 18 nations over three rounds with great results.

“Kieron played outstanding golf and had quite a following by the end of the week. For Megan and Samantha this was their first introduction to competing on the international stage and they managed themselves incredibly well. Rori made his debut here in Jakarta last year and we are so pleased that he improved two spots on his top seven finish in 2018.”

The participating countries could also enter teams, consisting of one A-Class and one B-Class player, into the Boys and Girls Team Competitions. Van Wyk and Nkosi combined for 444, which earned the South African Golf Development Board duo third overall in the Boys Team Competition.

“This course is a really an exceptionally tough test and I was impressed with the way in which these youngsters embraced the challenge,” said Braude.

“The whole group acclimatised really well to the hot and humid conditions and the fact that the organisers abandoned caddies this year to conform to European standards.

“The group went out each day with a goal and a purpose and their fighting spirit was really something to see. It was very special to see how the other countries’ players and the spectators rooted for our juniors and heart-warming to hear shouts of encouragement for our players. The group also had a fantastic bond and it was lovely to see the manner in which they kept on encouraging each other.”

Braude said the South African juniors embraced the opportunity to meet players from other countries.

“They made friends quickly and enjoyed their exposure to different cultures. They thrived in the competitive environment and enjoyed the opportunity to test themselves on this stage against top ranked juniors,” Braude said.

“I was constantly complimented on the conduct, etiquette and behaviour of our juniors, both on and off the course. Many people commented that their behaviour was impeccable and that you could never tell whether our players hit a good or bad shot. These attributes are the direct result of the wonderful golf development that is being done at provincial level by the unions and by the South African Golf Development Board.

“We would like to pay tribute to our amazing hosts. The hospitality and organisation of the staff and the whole team involved in the tournament was truly outstanding. And a big thank you to the green staff, who presented us with an immaculate course. GolfRSA is extremely grateful for the opportunity to once again bring a team to Jakarta and we thank our hosts profusely for a memorable week.”

To view the final results, click the link below: