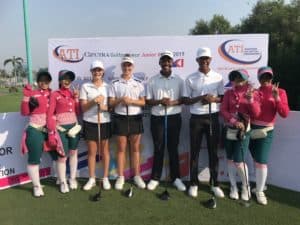 Team GolfRSA with their caddies during the practice round for the ATI Ciputra Golfpreneur Junior World 2019, presented by AKI & supported by the Junior Golf Tour of Asia at the Damai Indah Golf & Country Club in Indonesia; credit GolfRSA.

JAKARTA, Indonesia (21 May 2019) – Megan Streicher and Kieron van Wyk got off to a strong start in the ATI Ciputra Golfpreneur Junior World 2019, presented by AKI at the Damai Indah Golf & Country Club in Indonesia on Tuesday.

In fact, all four South African juniors competing in Jakarta are well-placed in the field of 134 players from 19 countries after round one at the Pantal Indah Kapuk (PIK) Course.

Streicher finished second with a level par 72 in the Girls Class A Division in the 15-18 year age group, while fellow GolfRSA B-Squad member Samantha Whateley opened with a 79 to just miss the top 10 in the same age group.

Van Wyk from the GolfRSA National Squad tied for third in the Boys Class A Division in the 15-18 year age group after returning a two-under-par 70 and his South African Golf Development Board stable-mate Rori Nkosi – making his second appearance in the popular international event – posted 75 to grab a share of eighth in the Boys Class B Division in the 13-14 year age group.

“Kieron played really solid golf all day,” said Womens Golf South Africa Vice-President Sarah Braude, who accompanied the quartet to Indonesia. “He cancelled bogeys at two and three with birdies at four and six and mixed another pair of birdies down the back on 14 and 15 with some great pars.

“Rory really what he learned last year and he was splitting fairways for most of day. He turned one-under after a birdie at the fifth, but he was another casualty of the day at short 12th. He then birdied the 13th, but dropped on 15 and that seemed to shake his confidence a little. He finished with bogey, triple and he was so disappointed, but I am certain that he will bounce back. It just shows you how quickly a great score can turn into disaster at this very challenging course.”

Streicher from Swellendam went out in 34, but lost the two shot advantage on her way home.

“Megan and Samantha both started on the 10th,” said Braude. “Megan hit two great shots at the 12th, but found the bunker with her approach and couldn’t up-and-down for par.

“She was striking the ball really well, though and racked up birdies at 12, 16 and 17 to turn two-under. She made a great birdie start on the back nine, but three bogeys on the bounce from the fifth brought her back to level par.

“Samantha had a very frustrating day with the flat-stick. So many good putts that just didn’t drop, but she was still really positive after her round. She is still in it, so if she can warm the putter up tomorrow, she could make a big upwards move.”

Braude was delighted to see the South African flag flying high in the Girls and Boys Team. Competitions. “We are third in both divisions and I’m so proud of this quartet, because they have set themselves a solid platform to start with.

“The field is highly competitive and being co-sanctioned with the Junior Golf Tour of Asia, the event has drawn top juniors internationally. Megan is five back from the defending champion Phannarai Meesom-Us from Thailand and Kieron is six behind Jung Soo Yang, who is also defending. The Australian holed out on two par fours for eagles and eagled a par five for 64.

“Course knowledge really pays on at this layout, but in addition to playing an incredibly tough course for the first time, there is the language barrier, weather that is very hot and humid and a long walk without caddies this year. Plus the girls had to navigate their way in a 3-club wind this afternoon.

“I cannot fault their positive spirits and they have all been great ambassadors for GolfRSA. They all decided not to dwell on the mistakes or missed opportunities, but rather to focus on the positives of day one and return with a positive frame of mind.” 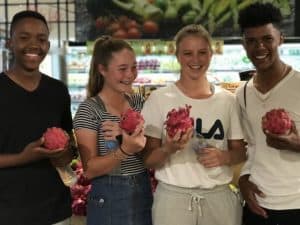 Team GolfRSA discovering one of the delights of competing abroad during a visit to the market ahead of the ATI Ciputra Golfpreneur Junior World 2019, presented by AKI and supported by the Junior Golf Tour of Asia at the Damai Indah Golf & Country Club in Indonesia; credit GolfRSA.

“I couldn’t fault my ball striking, but I had two 3-putts coming home and that was lack of focus,” she said. “The greens were very firm and fast and some pins were quite tricky, but I managed to shoot level par and I’m excited for moving day.”

“The first tee-shot was nerve-wracking, especially after they announced me, but I had great playing partners and I settled down quickly. It was quite challenging. The greens are firm and quick and it was very windy on some of the holes. I had to take at least three clubs extra on some holes, because I’m not a very long hitter. Nevertheless, I had a brilliant experience in my first international event and I look forward to improving in the second round.”

Ruimsig’s Van Wyk battled with his long game, but the putter worked like a charm.

“I wasn’t hitting the ball well and I got off to a poor start, but luckily my putter was on song. We teed off early so we didn’t have to battle the wind like the girls. If it can all come together tomorrow, I could be in with a chance. It was really fun playing with local juniors from Indonesia. We didn’t talk much, but it there was a good spirit in the 3-ball. It was interesting to hear what they had to say about their own country.”

Nkosi from Pecanwood, who finished top 10 last year, rued a rocky finish but is determined to come out guns blazing in the second round.

“I played with an English guy called Jake (Sowden) and a Japanese guy named Aran (Higashi) and we had a fun day out there. The course was quite gettable and the flags weren’t too tucked for us. I played quite steady, but I had a rough ending. Overall, quite a good round and if I can limit the mistakes tomorrow, I could make a good move towards the leaders.”