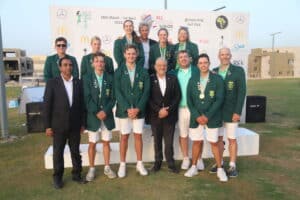 The victorious Team South Africa celebrating their title defence in the All Africa Junior Championship at the Palm Hills Golf Club in Cairo, Egypt; credit GolfRSA.

11 April 2022 – Team South Africa achieved what they set out to do at the 2022 All Africa Junior Championship, claiming a clean sweep in a successful title defence in the Boys and Girls Sections in Egypt in March.

As overwhelming favourites, the GolfRSA Junior Proteas were expected to score comfortable wins in the 72-hole event at Palm Hills Golf Club in Egypt, but they were pushed hard by the Moroccan team, who finished runners up in both sections.

The GolfRSA Junior Protea Boys completed a convincing 29-stroke win on one-under-par 863, but it took a superb combined final round of six under par to ensure the victory after the game Moroccan team had kept the gap to 13 strokes after three rounds.

Pascal Gunther, who led the individual competition from start to finish, completed the week at No 1, adding a final round 74 to his earlier efforts of 66, 70 and 73. He finished five strokes clear of Zimbabwe’s Michael Wallace. 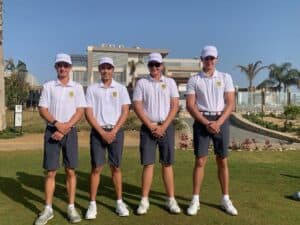 The GolfRSA Junior Proteas Boys Team at the All Africa Junior Championship at the Palm Hills Golf Club in Cairo, Egypt; credit GolfRSA.

Dan Bennett, who suffered an eye injury early in the event, was able to compete without hindrance for the first time in the final round. He fired a round of 65, the lowest of the tournament, to finish fourth overall, with Fabrizio de Abreu in fifth and Joshua Koekemoer in ninth.

“For the last two years, the global pandemic put paid to our regular trips abroad, so for this group it was their first taste of international competition, and it was a really good learning event for the boys,” said GolfRSA Golf Operations Manager Eden Thompson, who accompanied the team with sports psychologist Theo Bezuidenhout.

“The first day was fantastic. The intensity they brought to the golf course and the intent to perform was great. Pascal shot 66 in very windy conditions that was good enough for at least a 64 on the day and to have that score on day one set the tone for the week. He played really nicely throughout the week.

“Dan’s injury was a blow to the team. At one point we seriously considered pulling him off the golf course, but he wanted to stay for team. He battled on day two and three, but ‘Danny Clutch’, as we christened him, came back with a fight on the final day. 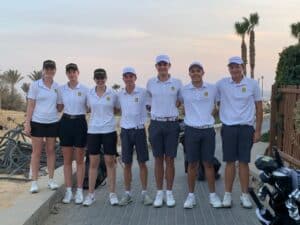 Team South Africa during their title defence in the All Africa Junior Championship at the Palm Hills Golf Club in Cairo, Egypt; credit GolfRSA.

“The team is very excited to have qualified for the Toyota Junior Golf World Cup in Japan later this year. We have quite a lot of work to do until then, but as a learning experience it was a very good tournament for the boys.

“Credit must go to the Egyptian Golf Federation and their board, who were amazing hosts and the Palm Hills Resort presenting us with such a fantastic golf course. Our thanks also to the Novotel Cairo 6th of October for the incredible accommodation and hospitality. All in all, an incredible event and a wonderful, memorable week for all the teams.

“A big thank you to Theo. The focus he brings to the boys and his ability to galvanise four individuals into a team once again played a big role in our performance. We look forward to taking this team to Japan.”

The Girls Competition was an even closer affair as the GolfRSA Junior Proteas’ historic dominance was challenged by the spirited Moroccans.

Bobbi Brown fired rounds of 67 and 68 over the first two days to anchor the team and they held a 14-stroke lead at the halfway stage of the tournament. Morocco rallied in round three to reduce the gap to nine strokes, but a solid performance from Samantha Whateley and Kyra van Kan on the final day secured a 10-stroke victory for the team over the Moroccans. 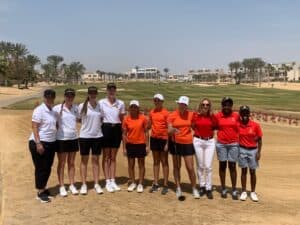 The GolfRSA Junior Proteas Girls Team during the All Africa Junior Championship at the Palm Hills Golf Club in Cairo, Egypt; credit GolfRSA.

Brown took the individual honours, after following on with rounds 74 and 73 to finish at six under par, four ahead of Morocco’s Sofia Essakali. Whateley and Van Kan tied for third on two over.

“It was the first junior call up for all three girls, and they were incredibly excited to put their green and gold colours on,” said Womens Golf South Africa president Sarah Braude.

“The course was quite unique, with elevation changes on some holes up to four storeys up or down. This course demanded good decision making off the tee as many fairways appeared quite wide, but positioning was crucial for the approach shots into the greens. The greens were fairly big, but the target areas were very small, since the greens had a lot of slopes and plateaus. Kyra really excelled on these greens, holing two slippery downhill putts in the first round for eagles.

“The team did exceptionally well to adapt to the desert conditions and especially the windy conditions. I was especially impressed with their patience and the tenacity and determination they brought to every round. They really shone on the back nine, and that is where they really put their foot on the pedal. We are incredibly proud of the team for securing their spot in the field for the Toyota Junior Golf World Cup.

“Congratulations to the Egyptian Golf Federation on a fantastic event. Incredible hosts, and their support throughout the tournament was exceptional. The girls absolutely loved the experience and forged friendships for life.