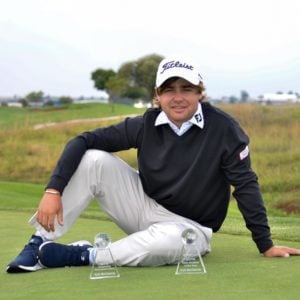 The former number one-ranked amateur took home GolfRSA’s Open Amateur of the Year Award and the Outstanding Achievement Award for his triumph in the 2017 English Amateur Stroke Play Championship, as well as the Sunshine Tour’s Newcomer of the Year.

The 20-year-old finished as the low amateur in the BMW South African Open in January and turned professional shortly afterwards, achieving notable early success, including a runner-up finish in his last event, the Steyn City Team Championship.

McClatchie’s standout performance in 2017 came at the Woodhall Spa Golf Club, where he shot rounds of 70, 66, 75 and 71 to follow in the footsteps of Neville Sundelson (1974), Richard Kaplan (1986), Craig Rivett (1989) and Charl Schwartzel (2002) in lifting the Brabazon Trophy as the English Amateur Stroke Play champion. 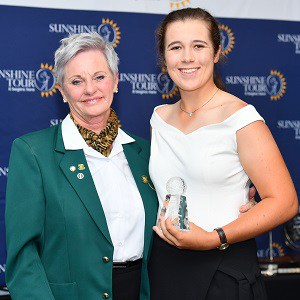 Another player to receive an Achievement Award was Danielle du Toit, who capped off her season with a magnificent performance in the All India Ladies Amateur Championship in Bangalore, India. Danielle became the 101st champion of event when she edged Malaysian star Ashley Lau Jen Wen 2 & 1 in a nail-biting 36-hole final at the Eagleton Golf Resort in Bangalore. 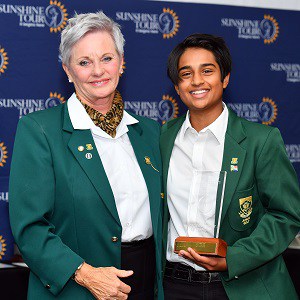 The 17-year-old retained her position as the top-ranked golfer for the whole of 2017 with a series of victories and top five finishes, including victory in the Sanlam South African Women’s Stroke Play Championship last April.

Mistry has been the leading golfer in the Girls Competitions at the All-Africa Junior Golf Challenge for two successive years and she underlined her tremendous potential earlier this year when she claimed a top six finish in the prestigious Annika Invitational USA that featured a field packed with top golfers from around the globe.

South Africa’s number one ranked junior, Jayden Schaper, collected the Junior Amateur of the Year award, having completed an unprecedented sweep of the SA Boys titles. 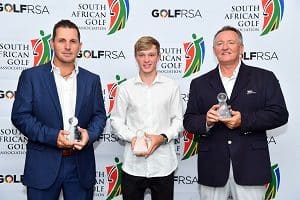 KwaZulu-Natal’s Derek Scullard was awarded the Mid-Amateur of the Year title, after enjoying his best season yet in 2017. He racked up trophies in the Lowveld, KwaZulu-Natal, Western Province and Limpopo Mid-Amateur Opens and cemented his upward trajectory in the rankings with a tie for fourth in the South African Mid-Amateur Stroke Play Championship and a top 10 finish in the North West Mid-Amateur Open.

Derek also won the Most Valuable Player accolade in the SA Country Districts with an unbeaten record that helped KwaZulu-Natal to victory in the A-Division.

Steve Williams was an obvious choice for the Senior Amateur of the Year award.

He rose to the number one spot in the Senior Rankings after his victory in the SA Senior Stroke Play in 2016 and he protected his spot at the top with five victories, two runner-up finishes and a top five in 2017. Early into 2018, Williams has already visited the winner’s circle three times.

In 2015, Steve upstaged some of South Africa’s leading senior professionals to lift the prestigious South African Senior Open trophy and in February this year, he made history again as the first golfer to claim the Senior Double when he won the Senior Players Championship at Sun City.