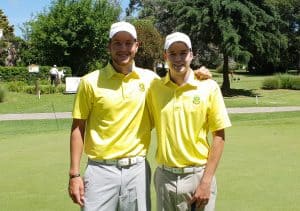 The pair combined for a top five finish in the International Competition of the 47th Juan Carlos Tailhade Cup at Los Lagartos Country Club and Filippi followed with a top 10 finish in the weather-reduced Argentine Amateur in Buenos Aires on Saturday.

The Western Province golfer was tied for second after an opening a three-under-par 69 at Highlands Park Country Club and stayed within striking distance of the lead with a second round 68.

“Unfortunately I let myself down over the last four holes in the third round with a bogey at 15 and doubles at 16 and 18 for a 78,” said South Africa’s number four ranked Filippi. “I was so furious with myself, because I dropped nine shots off the pace to tied 9th.

“I hoped I could make up some shots in the final round and get myself back into contention, but we woke up to heavy rain on Saturday. The round was suspended and a while later they said they were reducing the championship to 54 holes because the course was unplayable and forecast said it would rain all day.

“It was such a disappointment. I really liked the Highlands course and I felt I should have scored better, but a top 10 finish is nothing to complain about. I enjoyed this experience immensely and I’m really grateful that GolfRSA gave Therion and myself this opportunity. Both tournaments drew strong international fields and we played two challenging, tricky courses that put a premium on our course management skills. It was a great learning curve for both of us.”

The Bloemfontein golfer was in danger of missing the cut after rounds of 75 and 78 and, but he pulled it back brilliantly with a third round 71 to rocket to joint 34th.

“I fired four birdies and had an eagle at the par five fifth to make the cut on the number and I was really looking forward to the final round,” said South Africa’s number five ranked amateur.  “It felt like I finally got the measure of the course I was hoping to finish strong. Unfortunately you can’t do anything when the elements are against you.”

Nel, the only player of the GolfRSA National Squad who made every cut during the mid-year tour to the United Kingdom and Ireland, applauded GolfRSA for the South American experience.

“These two weeks were worlds away from anything Luca and I have experienced before,” said Nel.

“We were well outside our comfort zones with courses were completely different to anything we’ve played before and the extreme heat. I have really enjoyed the way I had to adapt my game plan and strategy and the way the weather and the courses challenged my course management.

“This has been an incredible experience for both of us and I believe Luca and I will benefit greatly in the future from everything we’ve learned here in Argentina over the last two weeks.”