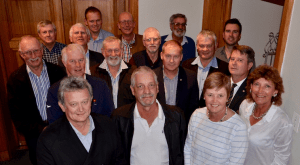 The recent changes to the GolfRSA Handicap System went off smoothly, thanks to the hard work of Wimpie du Plessis and her dedicated team of Implementation Specialists. This group of volunteers were responsible for the resounding success of the 3 September USGA Course Rating System (including Slope) implementation in South Africa and GolfRSA, represented by CEO Grant Hepburn, recently hosted a recognition dinner to acknowledge and pay tribute to their hard work over the past six months.

GolfRSA recognised their contributions and the event was followed by a meeting where the group discussed the lessons learnt and debated the strategy and action plans for 2019 . Eric Lefson conducted a session with the focus on ensuring consistency in the quality of ratings.