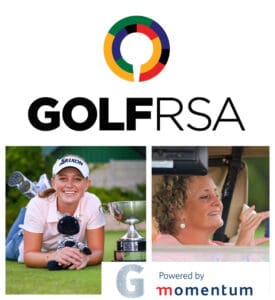 GolfRSA, two-time reigning SA Women’s Amateur champion Caitlyn Macnab and GolfRSA media manager Lali Stander made it a hat-trick of finalists for the federation in the 2021 Momentum gsport Awards

3 August 2021 – South Africa’s No 1-ranked Caitlyn Macnab, media manager Lali Stander and the federation itself made it a hat trick of finalists for GolfRSA in the 16th Momentum gsport Awards.

The Momentum gSport Awards is Africa’s longest running women’s sport recognition awards and is endorsed by the Department of Sport, Arts and Culture, and backed by leading insurance and financial advisory services, Momentum, as the headline sponsor. The list of 60 finalists across 20 categories was announced on Monday, 2 August.

For the first time, golf celebrates a finalist in the Momentum Athlete of the Year category, with two-time reigning SA Women’s Amateur champion Macnab looking to add this prestigious award to her bursting trophy cabinet.

The 19-year-old GolfRSA National Elite Squad standout has enjoyed an exceptional year and will be contesting for the Athlete of the Year honour against Protea cricketer Shabnim Ismail and South African football star Rhoda Mulaudzi, who have also enjoyed success on the international stage.

GolfRSA is in the running for a second Sports Federation of the Year Award, alongside Cycling SA and Gymnastics South Africa, while Stander makes a first appearance in the Women in Social Media category.

“The Momentum gsport Awards annually honours our outstanding athletes and those who make valuable contributions to raise the profile of women’s sport on the African continent. Congratulations to all this year’s nominees and especially those who made the shortlist,” said GolfRSA CEO Grant Hepburn.

“We are absolutely delighted to have three finalists in three different categories. This emphasizes the strides we have made in raising the profile of women’s golf in South Africa and drives us to stay the course. Thank you to Momentum and gsport for this recognition.

“The last year has been an extremely testing one for all sports federations and athletes in South Africa. The initial hard lockdown and subsequent stages of lockdown had a profound impact on the entire sports industry.

“Our immediate concern was the 40 000 plus people working at golf clubs, where 85% of these employees fall in the most vulnerable economic sector. Thanks to the amazing collaboration between all the golf bodies, we were able to navigate an earlier return to golf than anticipated.

“We are grateful to the Department of Sports, Art and Culture and the Department of Health for their continued engagement and guidance. A heartfelt thank you goes out to our GolfRSA Compliance Team, spearheaded by our Compliance Officer Wimpie du Plessis and Womens Golf South Africa President Sarah Braude, who developed the comprehensive Risk Mitigation Strategy that has kept golf operating in a safe environment since June 2020. And we applaud the industry staff, our golf clubs and unions, and all our golfers for their ongoing commitment to keep golf safe during this pandemic.

“Golf development remains one of the highest priorities for GolfRSA. The amazing work Womens Golf South Africa does to grow the game and to empower young golfers was highlighted by how the GolfRSA National Elite and B-Squad members dominated the winner’s circle over the last 12 months and the large number of young golfers who participated in our premier events for the first time this year.

“Caitlyn has been an outstanding ambassador for GolfRSA and South Africa and she a wonderful icon for the younger generation. We are especially proud to see her achievements recognised at the highest level.

“Lali set a high benchmark as first recipient of the Women in PR and Sponsorship Award in 2018 and we are delighted to see her make the short list in the social media category. She has embraced these platforms to showcase all elements of the work done by GolfRSA and to raise the profile of female athletes and women’s sport across the board.” 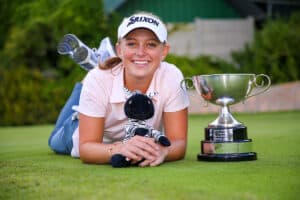 MACNAB – Momentum Athlete of the Year finalist
Macnab not only picked up where she left off before the hard lockdown, by winning the Ekurhuleni Women’s and Junior Championships late last year, but she successfully defended her SA Women’s Amateur crown in February and retained her No 1 ranking.

She got a taste of the pro ranks, playing on the Sunshine Ladies Tour once the premier amateur events in February were completed, where she made an immediate impact.

“In her first three starts, Caitlyn placed fourth in the Cape Town Ladies Open, second in the SuperSport Ladies Challenge and then made women’s golf history as the first amateur to win on Africa’s premier women’s professional circuit since Ashleigh Buhai in 2007 with her runaway eight-shot victory in the Jabra Ladies Classic,” said Womens Golf South Africa (WGSA) President Braude.

“At the season-finale Investec South African Women’s Open, she once again lived up to her No 1 billing to win the leading amateur honour at Westlake with a top 16 performance in the international field. Had she been eligible to receive points on the professional circuit, Caitlyn would have placed fourth overall on the final Investec Order of Merit.

“The victory at Glendower earned her a start in the Jabra Ladies Open in France. Caitlyn made the most of this opportunity to compete against the cream of the Ladies European Tour, once again taking the leading amateur prize with a top-20 finish at the Evian Resort Golf Club.

“At the heart of Caitlyn’s achievements is her fantastic work ethic and commitment and the way she embraces every opportunity to excel and improve. She is a wonderful role model who has spurred on the talented youngsters waiting in the wings, and we are incredibly proud to see her accomplishments recognised by Momentum and gsport. We wish her all the best as she starts the next chapter of her career with her golf scholarship at Texas Christian University in August.”

Macnab – a finalist last year in two categories (Emerging Athlete and School Star) – was delighted to be among the finalists for the Momentum Athlete of the Year.

“The last year has been very difficult and frustrating, especially having to juggle golf with my final school year between all the challenges brought on by the pandemic,” said the WGSA 2020/21 Player of the Year. “I am really proud of how I was able to manage it all and achieve some incredible milestones.

“I am very honoured to be named a finalist in the Momentum Athlete of the Year category and really grateful to Momentum and gsport for recognising my achievements. I also want to give my amazing team a shout-out for supporting me and thank everyone who gave me opportunities to reach for new and greater heights.”

Stander was stunned to be recognised in the Women in Social Media category alongside cricket content creator, Lesego Pooe and SABC Sport’s Nandi Buthelezi. 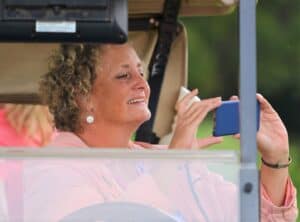 “I always joke that I am too old for social media, but I am absolutely stoked to be a finalist alongside legends like Lesego and Nandi,” she said. “Having covered many “Cinderella Sports” for more than 20 years, social media has been a game changer for the lesser sports and women’s sports.

“Gone are the days of traditional one-way communication via press releases and keeping your fingers crossed that a sports editor would find some space for your great story between all the “big sports”.

“Social media has transformed the media landscape, putting the smaller sporting codes on equal footing with sports that used to demand all the attention in traditional media. No more waiting. Now we break our own news. Now we have real conversations with audiences across many platforms and we can shine a spotlight on every element of our respective sports, from grassroots level to elite athletes to volunteers and those working tirelessly to grow and develop the sport.

“Social media is a lifeline that is helping us to break down barriers. Thank you to Momentum and gsport for recognising the incredible work done in social media to grow and develop sport – especially women in sport – in Africa. I am quite humbled to be among the finalists in this category and I thank GolfRSA for trusting me to tell their incredible stories.”

SHOW YOUR SUPPORT
The public help choose the winners through free voting which kicks off on the gsport Voting Hall at gsport.co.za/voting.

Show your support for GolfRSA – register a free membership at gsport.co.za and vote daily for your leading three candidates. Voting closes at midnight on 12 August 2021 and the finalist with the greatest number of votes, who doesn’t go on to win a category, will be declared the Public Choice Award winner.

View all the finalists HERE