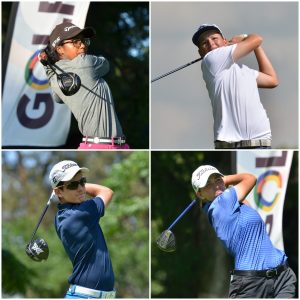 8 April 2021 – Four new faces have joined the men’s and women’s National Squads as GolfRSA continues to identify rising talent and assist with the development of the country’s top amateur golfers.

Royal Cape pair Isabella van Rooyen (18) and Zara le Keur (16) have earned their call ups in the women’s system, joining the B-Squad and Talent Identification Squad respectively, while juniors Daniel Bennett (15) and Christopher Bagnall (17) produced some strong performances this year to power their way into the Men’s National Squad.

Bennett, a semi-finalist in the Northern Amateur Matchplay, showed glimpses of his potential with excellent finishes in the men’s SA Swing events. The Beachwood golfer finished tie-27th in the African Amateur and tie-17th in the South African Amateur Championship.

Bagnall, who plays out of State Mines, got his year off to a fine start with a tie for 12th in the Nomads Coastal event at Selborne and a tie for third in the Nomads Inland event at ERPM Golf Club. He has risen to 10th in the Junior Rankings.

“Obviously the circumstances around COVID-19 made it extremely difficult to work consistently with the National Squads last year, but we were able to host meaningful training camps and video sessions and continued to work closely with the respective coaches to ensure that the players continued their development,” said GolfRSA CEO Grant Hepburn.

“We were delighted to see such strong performances from our Squad players during our flagship events and credit must go to the teams that are working with the players.

“We have retained the full men’s Squad for this year and welcomed Daniel and Christopher, who have both impressed with their performances since the lockdown restrictions lifted.

“In the women’s National Squad setup, we also welcomed two new players in Isabella and Zara, while Samantha Whateley deservedly graduated from the B-Squad to the Elite Squad, having climbed to 4th in the Open rankings with four top-10 finishes since the return to playing ranked events in October 2020.”

Given the fluid nature of the COVID-19 pandemic it is difficult to accurately forecast the extent to which the National Squad will be able to assist the players, particularly when it comes to overseas travel and tournaments. Yet Hepburn maintains that the squad system has plenty to offer the players as they look to improve to a point where they are fully prepared for life in the professional ranks.

“This is a group of very talented young players and we want to help them get the best out of their talents,” he says. “By helping them with funding, coaching, training programmes and tournaments we can hopefully apply the finishing touches to all the hard work put in by the players, coaches, clubs and unions.”

“We substituted ‘in-person’ camps with online Zoom Squad sessions for all three Squads,” she said. “And for the first time we were able to hold ‘camps’ that included our overseas based players, who dialed in from the USA. These ‘camps’ included mental performance coaching, guest speakers including Ashleigh Buhai, putting and short-game drill sessions and HIIT fitness sessions.”

Since the start of the year, however, both the men’s and women’s squads have held training camps under strict risk mitigation protocols, with the National Coaches able to work with the Squads.