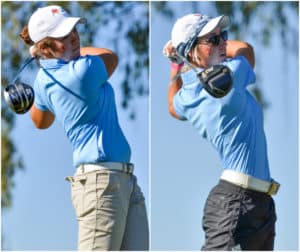 Danielle du Toit and Larissa du Preez combined for a six-under 138 to take Gauteng North A to the top of the first round leaderboard in the Swiss Team Trophy of the SA Women’s 72-Hole Teams Championship at Waterkloof Golf Club; credit Ernest Blignault.

21 May 2018 – Danielle du Toit and Larissa du Preez combined for an opening six-under-par 138 to put Gauteng North in the driver’s seat in the Swiss Team Challenge, while Boland leads the Challenge Trophy after round one of the SA Women’s 72-Hole Teams Championship at Waterkloof Golf Club on Monday.

Gauteng North dominated the annual event for four successive years from 2010, but their bid for a record fifth title in the Swiss Team Trophy competition was thwarted by KwaZulu-Natal at Mossel Bay Golf Club in 2014.

Hoping to cash in on their home course advantage, Du Toit and Du Preez from the Gauteng North A-team made the most of the perfect scoring conditions to open up a five shot lead over Ekurhuleni.

Akasia Country Club’s Du Preez – a first-year sport management student – offset a bogey on each nine with a trio of birdies for a 71. “Your approach shots here at Waterkloof is critical and the key to scoring well is putting,” said the Ernie Els and Fancourt Foundation player.

“The greens run very true, but they are extremely quick. If you hit it on the wrong side of the hole, you’re looking at bogey or worse. Accurate approach shots and a hot putter is key to a good score.”

Du Toit definitely had the measure of the greens, needing just 23 putts for a flawless 67.

“It was all down to the flat stick,” said Du Toit, who hopes to help her team return to their winning ways before she heads off to the United States to take up a golf scholarship at Purdue University, the Alma Mater of South African LPGA Tour player Paula Reto.

“This course is not extremely tough, but the greens are so slick and you can get severely punished if you don’t hit it in the right spots. I drove the ball well and I was never in any trouble, but I made all the birdies on offer and that was key to my round.”

South Africa’s third ranked Caitlyn Macnab anchored the Ekurhuleni A team with a two-under 70 and reigning Sanlam SA Women’s Stroke Play champion Casandra Hall backed her up with a 71.

The first upset of this year’s championship came from Gauteng.

Kaiyuree Moodley and Samantha Whateley from Gauteng B carded rounds of 75 to finish on 150, pipping Gauteng North A’s Zethu Myeki (75) and Woo-Ju Son (76) for third.

Defending champions KwaZulu-Natal rounded out the top five after Brittney-Fay Berger posted a 74 and University of Memphis student Michaela Fletcher returned a 79 to finish on 153. 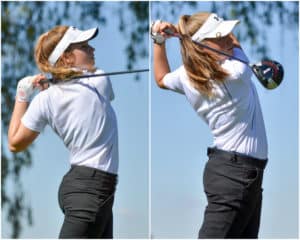 Annalie Swanepoel and Megan Streicher opened with respective rounds of 78 and 80 to push Boland top the table in the Challenge Trophy on a total of 14-over 158.

Ekurhuleni B is two shots adrift, courtesy of a 75 for Kiera Floyd and 85 from Teagan Lubbe.

Nicola Schoeman (80) and Patrizia Lombard (82) combined for 162 to seal third for Mpumalanga, while North West is just one stroke back after Elru Botha and Crystal Cooper registered respective rounds of 81 and 82.

A first round 67 moved Du Toit straight to the top of the individual leaderboard. Macnab is second and Du Preez finished in third. Hall’s 73 moved her to fourth while fellow Ekurhuleni amateur Sarah Bouch shares fifth on two over with Berger.