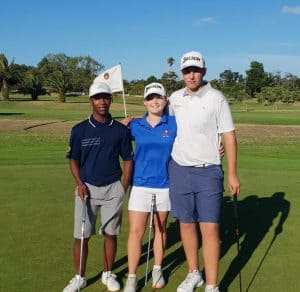 “It was my first playoff so I was very nervous,” she explained. “To stay calm I always tell myself to stick to my original game plan and not try anything different. Another thing I tell myself before each shot is that I have played this shot well before, so I can do it again. That keeps me positive,”

The playoff victory over Keanan Keffers and Senger, who had matched her 18-hole score of 71, secures 16-year-old Rothman a spot in the Bridge Junior Series regional finals to be played in April 2019. The regional finals will see an elite field battle for the ultimate prize – an all-expenses-paid trip to compete in the glittering Junior North and South Championship at Pinehurst, USA.

“Winning the finals is definitely a goal. You gain so much experience by not only playing the against the best in South Africa, but at Pinehurst you will compete against some very good junior golfers from across the world,” says Jordan, whose other goals for 2019 are to gain national colours and win two national events.

The turning point of her round was on the 10th where she drove into the hazard, but then hit a remarkable shot onto the green and holed a 17 footer for birdie.

“Jordan came very close to winning in Durbanville last year, tying for third. So it was wonderful to see her come back and secure the title in 2019,” said Paul Stewart, chief executive officer at Bridge Fund Managers. “Hopefully she can carry her terrific form to the regional finals and become the first South African girl to win a spot in the Junior North and South Championship at Pinehurst.”

The Bridge Junior Series launched in July 2017 with 16 tournaments countrywide, featuring Under-19 and Under-13 divisions for boys and girls. Endorsed by GolfRSA, the series is managed by Peter Little of the South African Golf Development Board.