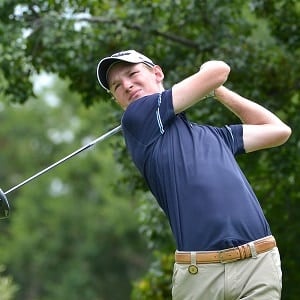 8 February 2018 – Oliver Gillberg lived up to his star billing when he fired seven birdies over the last nine holes at Pecanwood Golf and Country Club to top the third round leaderboard of the South African Stroke Play Championship on Thursday.

The world number 10 ranked opened his campaign in North West Province with a solid five-under 67, and shot to the top of the pile with a 62 in the second round. The back nine of 29 strokes for a 64 helped Gillberg to shake joint overnight leader Wilco Nienaber and take the 54-hole lead at 23-under-par 193.

GolfRSA National Squad player Matt Saulez was two behind Gillberg and Nienaber at the start of the round, and stayed in touch with half-a-dozen birdies.

For most of the round he watched the dog-fight from the side-lines, but the KwaZulu-Natal golfer hit the gas pedal over the closing holes, He reeled three successive birdies to match Gillberg’s score and moved to sole second on 21-under.

Nienaber – chasing his 12th victory in as many months – drives it a land-mile, but the 17-year-old struggled with his wedges. A battling four-under 68 will see the South African number two head into the final round four off the pace.

Gillberg kicked off his run on the back nine with four birdies on the trot from 10.

“The front nine was quiet; I only made two birdies and I bogeyed the eighth, so I needed something to happen,” he said. “I had a two-putt birdie at 10. At 11, I hit a gap-wedge to three metres and a good bunker shot at 12 to three and a half metres. And another short putt at 13 took me to 20-under.”

Riding a wave of confidence and momentum from racking up 23 birdies and an eagle over 54 holes, it’s hard to imagine that anyone can stop Gilberg’s march to victory. But the Karsta golfer disagrees.

“I played really great golf, but anyone who keeps it in the fairway and putts well in the last round, can still take the trophy,” he said. “Nothing is certain. That’s why I don’t get ahead of myself. Today was a good day. Tomorrow is in the future.”

Saulez maintained the form that saw him qualify for the BMW SA Open in January and make the cut in the co-sanctioned championship at Glendower, and the Durban Country Club golfer is looking forward to another highly-contested round with Gillberg and Nienaber on Friday.

“I’ve always been a good ball-striker but I believe it’s my short game and putting that’s brought me into the mix,” he said. “I made some really solid birdies coming down the stretch. It’s going to fun to play with those guys again, because we really push each other.”

Nienaber is the type who looks for silver linings whenever dark clouds form overhead. “I’m really happy with the way I drove the ball, but my wedge play was inconsistent and the putter was lukewarm,” said the GolfRSA National Squad player from Bloemfontein.

“But that’s golf, though. You have days like that where you just have to stay patient and keep a lid on your frustrations. I got through it and there is still 18 holes to play.”

Behind the top three there was a lot of jostling for position as players vied to close the gap on the frontrunners.

James du Preez finished in fourth at 15-under, one shot clear of Scotland’s Sam Locke and local favourite Louis Albertse. Du Preez returned a 68, while Locke fired a 65 and the Rustenburg golfer signed for 69.

Sweden’s Ludwig Aberg, Alex Gleeson from Ireland and South African pair Christiaan Burke and Cameron Moralee close out the top 10 at 13-under. Gleeson and Moralee both registered 64s, Aberg carded 70 and Burke from Potchefstroom posted a 67.