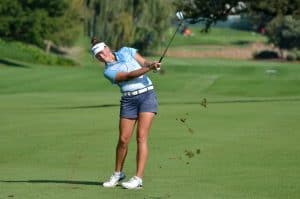 The 16-year-old first beat Kyra van Kan from Ekurhuleni 3 & 2 in the morning session to set a date with Rothman in round two.

The Swellendam golfer was 2-up after four holes, and won the seventh to go 3-up. Rothman hit back on the 10th, but the writing was on wall when Streicher won 11, 12 and 13. The Western Province golfer won the 14th hole to keep the match alive, but Streicher took the 15th to win 5 & 3.

The Womens Golf South Africa’s Most Improved Junior for 2018 showed off her blossoming form with a tie for sixth in the South African Women’s Stroke Play Championship on Tuesday, but exceeded her own expectations to make the top eight in one of South Africa’s premier amateur tournaments.

“I’ve got to pinch myself. Of course you always hope to go all the way, but you never know how the chips will fall in match play,” Streicher said.

“The opening match against Kyra was tough, but I kept plugging away when I took the lead. Jordan has a really good match play record, so once I got in front, I made sure to keep the pressure on. I’m looking forward to my quarters against Caitlyn. I played with her during the first round of the SA Stroke Play and it should be a really tight contest.”

The other big upset of the day saw Zethu Myeki – South Africa’s chief point-maker in the recent Regional All-Africa Challenge Trophy – go out in round one. The Randpark golfer lost her match against Nicola Schoeman at the 19th hole. Schoeman, in turn, went down 5 & 4 to local favourite Larissa du Preez.

Meanwhile the top five finishers in the South African Women’s Stroke Play all sailed through to the quarter-finals. 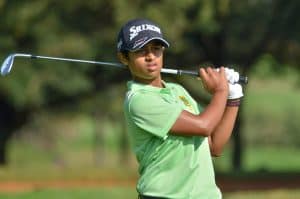 Champion Kajal Mistry from Gauteng stayed on course for the elusive calendar double after ousting Bobbi Brown from Western Province 6 & 5 in round one and defeating top Zimbabwean golfer Emily Jones 6 & 5 in round two.

Kiera Floyd from Ekurhuleni had to work hard to eliminate Nina Grey from Western Province 2 & 1, but she had a comfortable 5 & 4 win over Samantha Whateley from Gauteng to make the top eight. 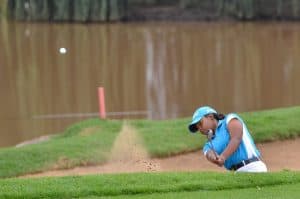 Pheletso Mota and Ineke Brynard from GolfRSA Talent Identification Squad both made the top eight in the Flight Division.

Mota from Free State won 5 & 4 and 2 & 1, while Brynard from Boland needed 20 holes to win her first match, but ousted fellow TID Squad member Tebogo Lefifi 6 & 5 in round two.

Lizzie Currie from KwaZulu-Natal kept her title defence on track with a 6 & 4 win in round one and the Southbroom golfer took down Elizabeth Lightley 3 & 2 in round two.

Eva Magala from Uganda will face Mota in the quarters after beating Millie Dondashe from Border at the 24th hole, while Charlene Oosthuizen routed fellow Gauteng North golfer Heidi van der Berg at the 20th hole to set a date with Shani Brynard from Boland.