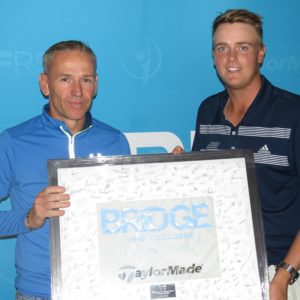 The 18-year-old Strand junior was among the eight winners and finalists who qualified for the South Final of the popular Bridge Fund Managers Junior Series at King David Mowbray Golf Club and competed for one spot in the world-class United States Golf Association event on Sunday.

Germishuys won the 36-hole final when he chipped in at the last hole to win by one shot from top ranked Christo Lamprecht and Sam Simpson.

In February, the Western Province junior prevailed in a 39-hole final to lift the SA Amateur title at Durban Country Club and earlier this month, added a second Nomads SA Boys U-19 Stroke Play trophy to his groaning mantle.

Germishuys drew on these experiences after he carded an even-par 72 in the first round and headed into the final round two shots off the pace from Lamprecht and Simpson.

Lamprecht kept a firm grip on the lead with birdies at six, seven, nine, 11 and 14. His co-leader slipped from contention early on, but rallied with birdies at five, 10 and 11 to stay in touch and further gains at 14 and 15 saw Simpson re-join Lamprecht at the front of the field.

Germishuys, meanwhile, had an adventurous start to the final round. He mixed three bogeys with two pars, a pair of birdies and eagles at both par fives (six and nine).

“It was a bit up and down, but I stayed patient and produced the shots when it counted to turn five-under,” said the Ernie Els and Fancourt Foundation member. “After birdies at 11 and 13, I just missed out on an eagle at 14 to make it a three-way tie for the lead.”

He holed the birdie putt, though, and moved within a shot of the leaders at nine-under.

“Christo dropped a shot at 17, but Sam was still in the lead heading down the last,” said Germishuys. “He chipped it close, but his par putt missed. That’s when I knew I still had a chance to win.

“I’ve played King David Mowbray many times, but the tee at the 18th was set forward. I’d never played it from that position, so instead of going with driver, I took 2-iron and drive it down the middle. I had 116 metres left to the flag. The pin was set back left with water on the left of the green, so I took a soft gap-wedge to avoid the water.

“The ball was on the flag all the way, but it pitched at the back and bounced the rough. I had about 15 metres to the flag. I went with the gap-wedge and I just had a feeling I would sink it. It was on line all the way and we watched pitch and roll into the hole. It was the best feeling in the world.”

Germishuys signed for a seven-under 65 to celebrate victory on nine-under.

He has enjoyed an incredible run of form over the last nine months, sparked by his success in the first Bridge Fund Managers Junior Series event in June last year.

In addition winning SA amateur golf’s flagship event, Germishuys won the Nomads SA Boys Under-19 Stroke Play title for a second time. He rose to fourth in the Open Amateur rankings and climbed to second in the Junior standings.

The Helderberg resident also earned junior and senior national colours and was a member of the victorious teams that garnered victory for South Africa in the All-Africa Junior Golf Challenge and Africa Region 5 Golf events. In June, he will be part of a four-man team travelling to Japan to fly the flag for South Africa in the Junior Golf World Cup.

“I can definitely date my success back to the first Bridge Fund win,” said Germishuys.

“I hadn’t won for two years, but getting back into the winner’s circle at Royal Cape sparked something. Shortly after, I won the Southern Cape Open and a second Bridge Fund Managers Junior Series title and had a bunch of top five and top 10 finishes last season.

“I had to fight really hard to win with such a strong field. Christo and Sam played incredibly well, and Tyran Snyders and Ayden Senger were always threatening. It was really tight, right down to the last hole. I am extremely grateful for this opportunity and I am very excited to go to America. To win the spot to play in one of the most prestigious junior events is a huge an honour.”

Germishuys will be joined by the winner of the North Final, to be decided Royal Johannesburg and Kensington Golf Club on Sunday 22 April in North Carolina.

The duo will compete in two warm-up events in North Carolina before they join the field of 90 boys and 90 girls that will compete in the 54-hole stroke play event at Pinehurst from 2-4 July. 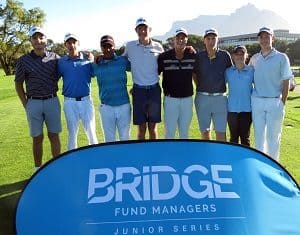 The field for the South Final was completed by Senger en Snyders, Keyan Loubser, Connor de Groote and Jordan Rothman. Loubser was the first South African Golf Development Board (SAGDB) player to capture a #BridgeJuniorSeries title and Rothman the first girl to qualify for the finals.

Durbanville Golf Club boasted half the finalists in Senger, Snyders, De Groote and Rothman. The winner is a member at Strand Golf Club, Simpson and Loubser represented Bellville Golf Club, while Lamprecht, a member of the Louis Oosthuizen Junior Academy, plays out of Pinnacle Point Golf Estate.

The Bridge Fund Managers Junior Series fired the imagination of junior golfers across the country, as both boys and girls teed it up dreaming of the ultimate prize of competing in the USA.

The series was played at celebrated golf courses across the country and featured Under-19 and Under-13 divisions, open to boys and girls, and attracted bumper fields and most of the country’s top ranked talent.

Managed by the South African Golf Development Board, eight development golfers (representing the local SAGDB branch) were from each union or region were sponsored to participate in their provincial tournament, with the number increased to 20 at two additional tournaments.

The SAGDB members seized the opportunity to display their talents. Hilmi Mallick and Cole Stevens both tie for the lead before losing electrifying play-offs at Strand and The Wanderers respectively before the breakthrough win for Loubser in East London in January 2018.

“This is only the first year of the Bridge Junior Series and it has already exceeded our expectations,” said Paul Stewart, Executive Director at Bridge Fund Managers.

“The series was all about giving junior golfers opportunities, so it has been particularly rewarding to see the girls and the SAGDB golfers demonstrating they need stand back for no-one.”

GolfRSA CEO Grant Hepburn said the Bridge Fund Managers Junior Series proved extremely popular. “We were amazed at the big fields at some events and we witnessed some thrilling challengers that went down to the wire. It is a fantastic initiative giving opportunities for our juniors to hone their tournament craft and make new friends.”

For more information: Visit https://juniorseries.bridgefm.co.za or contact Peter Little of the SA Golf Development Board on 084 656 1102.