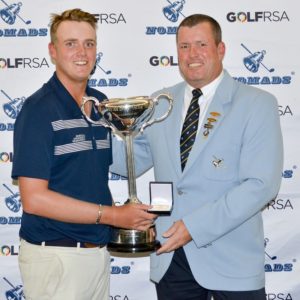 Two years ago, an eagle finish in the third round was the kicker that boosted the Western Province junior to victory at Bloemfontein Golf Club. And another third round eagle – this time at the par five 17th – turned the tide for 2018 Sanlam SA Amateur champion this time around.

Germishuys was six shots off the pace after rounds of 73 and 70, but vaulted into contention courtesy of a flawless third round six-under 66.

“I had four birdies, but I was still quite far behind the leaders and the eagle changed the momentum,” said Germishuys of his 13-under-par 275 triumph. “I hit a good drive down the middle and 7-iron to about 12 foot behind the pin. I had a slippery left-to-right downhill putt left, but I hit it straight on the line and it dropped.”

Germishuys joined Werner Deyzel from Gauteng North in second and the pair was just one shot shy of Christiaan Burke from North West and Central Gauteng junior Cole Stevens, who set the 54-hole target at eight-under.

It took the All-Africa Junior Golf Challenge team-mates just a few holes to dislodge the frontrunners.

Making the most of his home course advantage, Deyzel racked up four birdies in the first five holes, while Germishuys got off the mark with a pair of gains at the first and third holes.

“Werner had a double bogey at six and I dropped a shot at the eighth,” said Germishuys. “I took on a risky shot with the driver in the third round, so I went with 3-wood instead, but I drew it too much and ended up in the fairway bunker. Then I hit the trap-shot too good, overshot the green and couldn’t up and down to save par.”

Deyzel made three birdies on the bounce from the ninth, but Germishuys also warmed up the putter.

“The putts started dropping on the back nine,” said the 18-year-old Strand golfer. “I birdied 11 and made a six metre putt for birdie at 13. At 15, I missed the green right from 105 metres and had about eight metres to the pin. I was annoyed with myself, but then I holed it from the fringe.”

Deyzel, meanwhile, bogeyed 14 and 16 either side of an eagle at 14 and the pair were tied for the lead after both players birdied the par five 17th.

“We both hit it down the fairway,” said Germishuys. “I had the same distance that I had at 15, but I aimed it a little more left this time and the ball stopped two feet from the hole. Werner hit his approach to five metres. His birdie putt pulled up two inches short and I tapped in for the win.” 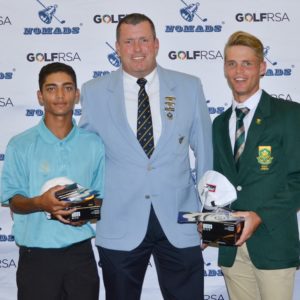 Deyzel, who also carded 66, tied for second with South African Golf Development Board member Stevens, who closed with a final round 68.

Germishuys was absolutely thrilled with the outcome.

“This victory almost means more to me that the first time, because I think I appreciate it more this time around,” said the two-time Bridge Fund Managers Junior Series, winner.

“We often get told we should stop playing junior events once we finish matric. I don’t agree. I love playing the junior circuit because it’s super competitive. I’m really grateful to the Ernie Els and Fancourt Foundation and GolfRSA for the opportunities and support they have given me, including competing here at Woodhill this week.”

Winning the Sanlam SA Amateur Championship was a career-defining moment for Germishuys and he hopes to draw on the experience when he starts the Match Play Championship on Thursday.

“I reckon I’ve improved some, so hopefully this year, I’ll get a bit further in the knock-out stage,” said Germishuys, who faces Ben van Wyk from Southern Cape in the first round.