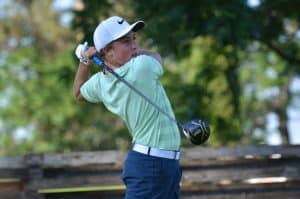 Luc Gavagnin from North West leads the field after the first round of the Gowrie SA Under-15 Challenge at Gowrie Farm Golf Estate; credit GolfRSA.

25 March 2019 – North West junior Luc Gavagnin laid down an early marker in the fourth Gowrie SA Under-15 Challenge when he surged into the first round lead on Monday.

Gavagnin overturned a bogey start and a second dropped shot at the par four third with back-to-back birdies at the seventh and eighth holes. Starting the homebound loop on level par, he fired birdies at 13, 15 and 18 to finish in red numbers.

Wessels also had a handful of bogeys over the first 11 holes, but the Leopard Park golfer hit an upwards trajectory with three birdies on the bounce from the par five 13th. A final gain at the par five closing hole for a 70 moved Wessels into second on his own.

Craig Jacobs from Western Province and Gauteng North’s Phil Snyman share third on two-over, while Ethan Govender from KwaZulu-Natal finished alone in fifth with a two-over 73.