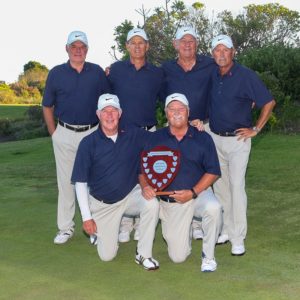 11 December 2017 – Gauteng North won the B-Division in the 2017 South African Super Senior Inter-Provincial Championship with an unbeaten performance at Pezula Golf Club in Knysna from 4-8 December.

“To be honest, we were gutted after last year’s relegation and we were determined to get ourselves back in the A-Division,” said player and manager Dirk Swanevelder. “This victory was a total team effort and every player on the team shared in our success.”

Gauteng North made a perfect start against Free State to win the Foursomes 3 – 0 and a clean sweep in the Singles bumped their tally to eight points. Eastern Province responded with by beating Free State 8 – 1 to stay in the mix.

Although Gauteng North had a one games point advantage, the side trailed Eastern Province 2 – 1 heading into the Singles.

Swanevelder led from the front, beating Willie Prince 3 & 2 to level the score. Groenewald won 2 & 1 against Alan Glover, Viljoen defeated Johnson Madikane 2-up and Kriel beat Zolile Nqana 1-up to guarantee the victory.

Frans Kana beat Van Niekerk to claim another point for Eastern Province, but it was too little, too late, and a halve from Van Wyk against Hermanus Potgieter produced a 5.5 – 3.5 result that secured the promotion for the Daisies.

“It was always going to be a big week,” said Swanevelder.

“We needed every guy on the team to deliver and they didn’t disappoint. I am incredibly proud of the guys and the way in which they approached this championship. Our motto was that it wasn’t over until the last putt dropped and that was the attitude all the players took on to the golf course in every round, in every single match.

“On behalf of the team, we would like to congratulate Etienne on a fantastic debut. Etienne won all his games and finished the week as our top player. You couldn’t ask for a bigger commitment from a rookie.

“The camaraderie between the Super Seniors is something special and the atmosphere and spirit of this year’s championship was incredible. It was a fantastic tournament and what a privilege to compete on a truly magnificent and picturesque course. Our sincere thanks to our competitors for a fabulous week of competition and to our union for all their support.”