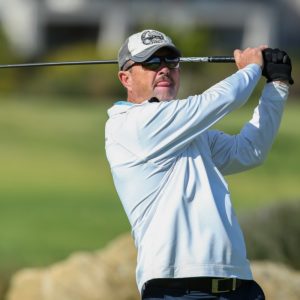 Pieter Cooper at number one led Gauteng North to two victories on day one of the SA Senior A Division Inter-Provincial at St Francis Links; credit Roger Sedres / Image SA.

23 April 2018 – Gauteng North made a dream start to the 2018 SA Senior Inter-Provincial A-Division with runaway victories in the first round at St Francis Links on Monday.

It has been 16 years since Gauteng North defeated Central Gauteng to lift the coveted trophy, but the Daisies Seniors made a huge stand to signal their intend in this year’s championship.

The side mowed down North West 9 – 3 and Chris Delport, Phillip Bierman, Conrad Rauch, Derik Piek, Henry Roodt, Gordon Wessels, William Skinner and number one Pieter Cooper combined to hand neighbours Ekurhuleni a 11.5 – 0.5 drubbing to move to the top of the points table.

And the bleeding continued for Ekurhuleni, who went down 9 – 3 to North West.

Central Gauteng celebrated a successful title defence in the 30th edition at the Simola Golf and Country Estate in Knysna last year.

The defending champions started their title hat-trick bid with back-to-back victories to join Gauteng North in the number one spot after beating KwaZulu-Natal 8 – 4 and Eastern Province 7 – 5.

The host union made a strong recovery, though, and led Attie Burger at number one, the Eastern Province side rallied to defeat KwaZulu-Natal 8 – 4.

Western Province ruled the roost with four victories in five years before Central Gauteng became the dominant force in 2016.

The former champions had a tough opener against Southern Cape and the match ended in a 6-all draw.

The B-Division Senior and Super Senior matches start at Pecanwood Golf and Country Estate on Tuesday.

SENIORS A DIVISION – Round 1