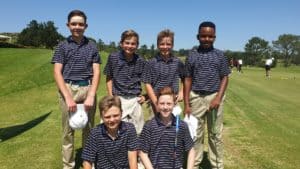 26 September 2019 – Gauteng North stayed on course for a successful title defence in the Nomads SA Under-13 Championship, but Grant Labuschagne from Central Gauteng closed in on Dujuan Snyman in the individual competition Thursday’s second round at Devonvale Wine and Golf Estate.

Gauteng North opened up a yawning lead on the chasing pack with an opening round total of 361 and a combined total of 374 stretched their advantage to from 11 to 14 shots.

Woodhill Country Club’s Snyman, who led the challenge for Gauteng North with a flawless seven-under-par 65 on day one, once again set the pace alongside Zinan Maimane from Silver Lakes Country Club for the defending champions.

The pair both went around the championship layout in 72 strokes.

Dian Kruger added 74 to their tally, while Ross Campbell and Benjamin van Wyk posted a pair of 78s to keep Gauteng North in pole position on 735. Roelof Craig carded a non-counting 79.

Central Gauteng held on to third on 762, while 2017 champions North West remained in fourth position on 775 and Ekurhuleni rounded out the top five on 781.

While there was little movement in the team competition, the battle for individual honours heated up.

Defending champion Snyman had a comfortable three-shot cushion after his opening 65, but four dropped shots in the last four holes could prove costly for the Woodhill junior after Labuschagne cut his overnight lead to two shots.

Labuschagne overcame a bogey start on the 10th with a trio of birdies from the 11th hole and the The Ruimsig Country Club junior offset two further bogeys with five more gains for a five-under-par 67 to move to second on 139.