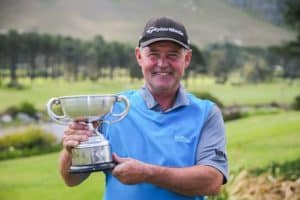 The 51-year-old from Wellington stunned the field when he shot into contention with successive rounds of 72 in his debut on the senior amateur national circuit. Not surprisingly, the ‘rookie’ earned overwhelming applause after he defeated reigning Players champion Andre van Dyk at the first extra hole of a sudden-death play-off.

He trailed by five strokes after a double bogey at nine, but just when it looked as though Watson would set an imposing clubhouse target, his title bid abruptly collapsed. The Ekurhuleni golfer gave eight shots back to the field over the first six holes of the back nine and the chasing pack pounced.

A birdie at 12 helped Van der Merwe to shoot to the top of the pile, with Stephen Johnston from Gauteng and fellow Boland golfers Van Dyk and Francois le Roux also in pursuit.

Van Dyk, who stayed within two shots of his lead, bogeyed the last hole and set the target at six-over-par 222 with a round of 75. Van der Merwe – playing in the final group – had a two lead coming down the 18th hole.

“I hit two good shots, but I duffed my chip and three putted for a double-bogey,” said Van Der Merwe after closing with a 78 to join Van Dyk at six-over-par 222. “I should have won it in regulation play, but once again my putter let me down. I struck the ball extremely well over all three rounds, but I couldn’t sink a putt under eight foot to save my life.”

The pair headed back to the 10th tee, where Van der Merwe mailed his tee shot straight down the middle. Van Dyk hit a huge drive that drifted down the left and finished just short of the fairway bunker. His approach to a pin, tucked back right, flew the green, while Van der Merwe hit his second pin high right.

Van Dyk chipped, but his effort raced past the hole and Van der Merwe also put too much pace on his birdie putt. However, when Van Dyk missed the return putt for par, Van der Merwe drained the “putt of his life” and his ball dropped to the bottom of the cup. 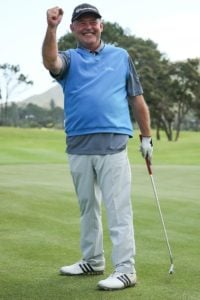 “I feel 10 feet tall,” said the beaming Van der Merwe. “I’ve won more than 50 titles in club opens or Boland Golf Union events, but this is such a special moment.

“I’ve hit the ball so well all week, but the putts refused to drop. It was frustrating, but I had my partner Cornel (de Jager) on the bag and she kept me calm and confident that the putter would warm up. I holed a short one for birdie at 12, but it took another seven holes before it warmed up again.

“That last putt wasn’t very long – maybe six feet – but it rolled on the perfect line all the way and when it dropped, I almost couldn’t believe it. You know, I nearly didn’t even enter. They told me I had to enter online and I couldn’t figure it out, so if it wasn’t for Mariette at Boland Golf Union, I wouldn’t even have been here this week.

“I’ve played Hermanus just twice in the last 18 years. We had to endure three club winds in all three rounds and this week was a real test of patience, but what a fantastic test of golf. To beat some of the legends of the game and to win on the senior circuit has been a dream, but now it’s a reality. I am sure this is how David felt when he knocked down Goliath.”