Frittelli steady as he eyes the Freddie Tait Cup 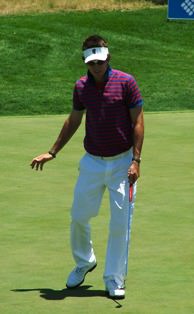 Nineteen year old amateur Dylan Frittelli played steadily for his 72 today, to finish with a 54 hole total of 215, one under par, after the third round of the South African Open Championship. He is three shots clear of the next best amateur and considered as favourite to take the Freddie Tait Cup which goes to the leading amateur on conclusion of tomorrow’s final round.

This is the Irene Country Club member’s third South African Amateur Championship, up to now he has never finished as the leading amateur.

Enjoying another beautiful summer’s day at Pearl Valley Golf Estates, Paarl, Western Cape, the Irene Country Club golfer from Gauteng North, started with a bogey, missing a short putt on the first hole. From there he played steadily recording a birdie on fifth, another bogey on hole 11 and a birdie on hole 14.

“I played steadily, hit thirteen greens in regulation. Missing two short putts that horse-shoed out, one on hole 12 and the other on 18, were very frustrating,” said the University of Texas freshman, with a shrug of the shoulders after his round.

Frittelli is in 41st place tied with thirteen other players.

Leading the field is over night leader Pablo Martin, of Spain. He recorded a lever par 72 giving him a 54 hole total of 204, eleven under par. His lead has been reduced to one shot. Edoardo Molinari, of Italy, who had a 69 today, is on 214. 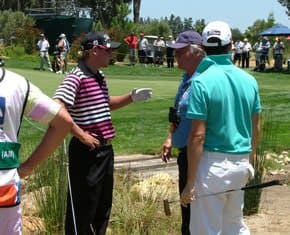 JG Claassen, the talented eighteen year old Orkney Golf Club member, started the day on one under par for the championship. He really got things going at the start of his third round. He birdied two of the first three holes to get to three under for the championship. But then he double bogeyed the fourth hole, a par three. One more birdie and bogey enabled him to turn in regulation 36.

He started solidly on the back nine, nailing a three metre putt for a birdie on the tenth hole.

Inexplicably, on the par three twelfth hole, the South African and Zimbabwe Stroke Play Champion pushed his tee shot right of the water hazard running down the side of the green. Unable to find his ball he was required to go back to the tee. Playing three he proceeded to play exactly the same shot, into the rough on the right, but this time he found his ball. He finished with a triple bogey, dropping back to level par for the championship.

One more birdie and two bogeys resulted in a back nine of 39 and a disappointing third round score of 75, three over par, for Claassen. This gave him a 54 hole total of 217, two over par. He is tied in 69th place.

The third amateur to have made the cut was Ryan Dreyer who carded a four over par 76 today to finish on 221, five over par.

“It was a bit of the same again, I was three over, for my round, after just four holes. I had to try and work my way back from there, just as I have had to do the previous two days,” said a disappointed Glacier SA Amateur Champion after his round.

“I am really not playing well,” lamented Dreyer. His frustration was evident in the stats of his round; he had had 25 putts and hit only two greens in regulation, of the last eleven holes played.

Both Dreyer and Claassen are going to have to take the game to Frittelli if they are to stand any chance of having either their names engraved onto the Freddie Tait Cup tomorrow.

The final round will be played tomorrow.